Mogenar is a Mogenar-class War Golem that was summoned to be the guardian of the Bryyo Leviathan Core. It is a boss in Metroid Prime 3: Corruption.

The only completely functional Mogenar that Samus encounters is the one located in the Leviathan seed on Bryyo, which has been infused with Phazon spouting out of the Leviathan's very core and thus gone rogue. It boasts an imposing figure that, while not on the level of the massive Quadraxis or the gigantic Space Pirate Kraid, is at least eight times taller than Samus, with an immense frame that causes it to resemble some kind of Mesoamerican idol. It has three eyes on its reptilian-looking face, keeping in touch with its Bryyonian origins.

All evidence seem to point to that the Mogenar faced in Bryyo's Seed was one of the special Golems built out of stone by the last Lord of Science. Taking into account the advice given to him long ago by the Chozo, the special Mogenars were built using both the ancient "magic" of old and the highest technology of new; these War Golems had advantages over the purely-mechanical Mogenars (which are seen scattered throughout ruins of Bryyonian society) built by the other Science Lords.

When Samus approaches Mogenar, it activates, and using a unique ability, uses a form of immaterial projection of its hands to pull four red energy orbs off nearby pedestals, putting two into slots on its shoulders, one on its belly, and one on its back. These orbs act as Mogenar's weak points and energy generators, and all four must be destroyed; at first, any weapon can be used to damage them, but once it explodes, Phazon energy from Hypermode must be used to blow up each slot, rendering it useless. The three spheres on the golem's front can switch positions to avoid damage.

Its attacks include ramming charges, energy streams, jumps that release a Phazon shockwave, generating additional immaterial hands to attack Samus directly, slamming its hands against the floor to create a massive barrage with Phazon rocks, or, when its energy orbs are near destruction, standing in the middle of the room and using its immaterial hands to retrieve more unharmed spheres from the pedestals of the room to regenerate its damaged ones. If Samus is quick enough, the orbs can be destroyed before they make it to Mogenar. Also if Samus uses an Ice Missile while Mogenar is using its laser breath, its face will be temporarly frozen, leaving the energy orbs vulnerable to attack.

After destroying Mogenar's first sphere and overloading its Phazon core, Mogenar will generate a form of Phazite on its feet for additional invulnerability, though this limits its attack range to only two attacks: its ramming dive and its shockwave jump. These Phazite platings can be destroyed by simple Morph Ball Bombs, but Samus should be wary of staying in Morph Ball too long; the shockwave blast the Golem employs is too tall to be jumped over with the Spring Ball. When the second of its energy orbs has been destroyed, Mogenar no longer uses its former regeneration technique; rather, the last remaining sphere on its front will start acquiring more and more armor as time passes, and speed is necessary to blast off the sphere's cap before it regenerates and overload it with Hypermode. When three of its spheres have been destroyed, the beast no longer can defend itself adequately and is mostly reduced, again, to its ramming dive attack and shockwave, though it can still throw in any of its attacks in-between. The last orb on its back will be exposed when its back is turned to Samus after its ramming dive, but it needs to be hit quickly before Mogenar turns around again. Also Samus can go into her Morph Ball and go around the back of Mogenar as the Morph Ball is faster than the side dashes; again, Samus must be quick before Mogenar turns around.

When the final orb is overloaded, Mogenar explodes, leaving behind the Hyper Ball upgrade and raising Samus's corruption level to 25%, which in turn causes Samus to vomit Phazon. 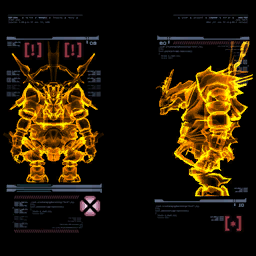 Phazon Crystals are powering a protective barrier. An explosion near his feet could probably destroy them.*

Corrupted War Golem reanimated and energized with Phazon. Relies on socketed energy orbs as a source of power. The orbs themselves have a fragile exterior but contain pure Phazon energy within. This energy must be completely overloaded before it will be destroyed. Eliminating all power sources is the only way to bring Mogenar offline.

Before battle
"Ancient Reptilicus War Golem appears to be receiving energy from the core of the Seed."

Orb broken
"Shattered orb has exposed a Phazon core. Overload the core with Phazon energy to destroy it."

* If Mogenar's feet are scanned when the crystals materialize.

Mogenar tries to crush Samus while she escaped in her Morph Ball in a Diorama.

Mogenar fires a giant Phazon laser from its mouth. However, this attack can be stopped by the use of an Ice Missile.

After assimilating Phazon armor to generate a force field, Samus uses the Morph Ball to lay Bombs nearby.

Mogenar's frontal orbs have been destroyed. 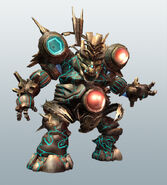