For other uses, see Ball (Disambiguation)

All games in the Metroid series

One of the most unique and integral items of the Metroid games, the Morph Ball (モーフボール or 丸まり, Mōfu Bōru or Marumari?), also known as the Morphing Ball (モーフィングボール, Mōfingu Bōru?), Maru Mari or Round Ball[1] is the Alt-Form of Samus Aran and allows her to turn into a sphere 0.8 meters in diameter. It allows her to enter small tunnels and openings, which often lead to previously inaccessible areas.

Morph Ball Mode is vital in defeating many bosses from the series, including Amorbis in Metroid Prime 2: Echoes and the Queen Metroid in Metroid II: Return of Samus. In non-Prime games, it usually plays an important role in escaping from enemies, such as in Metroid: Zero Mission. In almost every game, a combination of the Morph Ball and a Bomb is the only way to detach a feeding Metroid. In the three Zebes-based games, the item is almost immediately acquired by going left (from the sidescrolling perspective) after entering Brinstar.

The Morph Ball has many upgrades, such as the Bomb Module, Power Bomb, Spring Ball, Force Ball, Boost Ball, and Spider Ball. Metroid Prime 3: Corruption introduces the new Hyper Ball ability, which allows Samus to generate deadly arcing tendrils of Phazon energy around her when in Hypermode. In Metroid Prime Pinball, the Morph Ball is the ball the player plays with on the pinball machine and introduces the Force Ball.

Throughout the series (most prominently in Echoes), the Morph Ball has changed in appearance according to suit upgrades. The Morph Ball when Samus is in possession of the basic Power Suit is a yellow or gold hue and has three grooves that spiral outwards from the center on each side. Between the two halves is a ball of energy, which is believed to be the essence of Samus. The energy varies in color depending on the suit Samus is wearing: With the Power Suit it is yellow, with the Varia Suit it is usually blue, green or white.

In Metroid Prime, the Morph Ball's structure changes with the acquisition of the Spider Ball: The edges of both halves become concave and filled by the same energy as the core, which is now green. The Morph Ball's color scheme changes twice more after this: When the Gravity Suit is acquired, it becomes purple with a blue core, and ultimately it becomes black with a deep red-orange core when Samus is infused with the Phazon Suit.

In Metroid Prime 3: Corruption, the Morph Ball becomes a Phazon-blue ball with hexagonal tiles over it after the PED Suit is acquired. When the Hazard Shield is collected, extra plating is added to the Morph Ball. Also, if Samus touches a Liquid Phazon enemy while in Morph Ball mode, she will become engulfed by a portion of the creature, which will eat away at her suit.

In Metroid: Other M, the Morph Ball has a different appearance. The ball and energy are yellow with the Power Suit like in past appearances, but there are now three red stripes that spiral out from the center in the place of the grooves, making it closer in resemblance to the Fusion Suit's Morph Ball form. When the Varia Feature is authorized and activated, the energy becomes green and three shorter yellow stripes are placed alongside the red ones, similar to the small blue stripes on Dark Samus's Morph Ball. When the Gravity Feature is activated, the Morph Ball does not change since the Gravity Feature does not change the suit's color in this game.

In Metroid: Samus Returns, the Morph Ball undergoes a dramatic redesign: The spiraling lines are replaced by more linear grooves and rivets, while the edges are each encircled by a red ring. However, the Gravity Suit once again changes the color scheme to purple and blue.

Use by enemies of Samus Aran[]

According to a Space Pirate Data "Hunter Weapons" in Prime, the Pirates found the Morph Ball to be a very curious and intriguing technology, but attempts at reverse-engineering the Morph Ball technology all ended in a disaster: the Science Team "wisely decided to move on" after the first four test subjects were horribly broken and twisted after engaging their Morph Ball prototypes.

Dark Samus also possessed a twisted variant of the Morph Ball. She is shown using it in the second fight with her in the Sanctuary Fortress in Echoes, and she creates Dark Echoes which can use the Morph Ball during the fight with AU 313 at the end of Corruption. On both occasions, she uses the Boost Ball and is able to generate massive amounts of kinetic energy at once, which propels her around the area at shocking speeds. Dark Samus's Morph Ball is similar to Samus's and has an eye on each side in Echoes. It is very hard to actually make out the appearance of Dark Samus's Morph Ball in Corruption because it is always traveling at great speeds. The energy surrounding it while it is using the Boost Ball also obscures its appearance.

Dark Samus' Morph Ball also heavily resembles the Glire, Glice and Glunder enemies in Super Smash Bros. Brawl. The Morph Ball has limited appearances in gameplay as Samus; her rolling dodge has her literally roll aside to avoid attacks, and her Down-B special "Bomb" transforms her to the Morph Ball and drops the signature Bomb.

"Maru Mari - Get this, and Samus' body will become round, allowing entry into narrow passages."

The Official Nintendo Player's Guide
"As soon as you start, go to the left. Jump up and cross the high walls, then you can get hold of the Maru Mari. This is useful for going through walls or narrow passageways."

Super Metroid manual
"You can use the Morphing Ball to make Samus roll into a ball and squeeze into narrow areas."

Metroid Fusion manual
"Use this power to roll into a ball and move through narrow passageways. Press down twice on the Control Pad."

Like the Power Suit itself, the Morph Ball is upgradeable via several modifications located throughout Tallon IV. 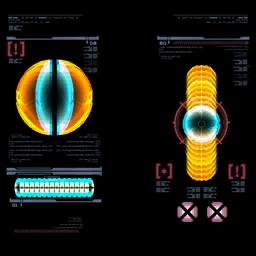 The Morph Ball changes your suit into a compact, mobile sphere.
Press

Like the Power Suit, the Morph Ball is modular. There are several modifications that can be added to improve performance.

Metroid Official Site interview
"The Morphball is also an outstandingly original ability. It’s a really fun item to play with, but it also has many applications in the game. Since the Morphball’s design isn’t purposed for combat, the player can use it for transportation, to find hidden paths, or to solve puzzles. The Morphball really does differentiate this game from other FPS games, doesn’t it?" - Mark Pacini

"And it’s not just the visors; the Morph Ball is another important element that distinguishes Metroid Prime from different first-person games, but that was a big challenge. Around when we first started talking about the idea of Metroid Prime, we all thought that we just couldn’t make a Metroid game without the Morph Ball. What’s more, the way we designed the Morph Ball to be used made us all think that it should be presented in a third-person view. The switch to first person to third person was a tough challenge, but since it came out even better than we thought it would, we concentrated on what role we should give to the Morph Ball in the game. Comparing the Morph Ball with the first-person game state of Samus and her arm cannon, the Morph Ball was intentionally designed for the modes without combat. Since that round ball form doesn’t evocate a feeling of power, it doesn’t answer to the nature of combat. The Morph Ball is much more useful than that, and we positioned it as a key for the game’s strategy to be a cool item."[2]

Metroid Prime 2: Dark Echoes Q&A
QUESTION: What exactly happens [to Samus inside of it] when she is in Morph Ball mode?
ANSWER: The Space Pirates, too, are still searching frantically for the answer to that question...[1]
QUESTION: Previously in Metroid Prime 1, the Space Pirates went to great lengths to try to replicate Samus' suit technology, but in this installment there doesn't seem to be any activity like that. Will we be able to see Space Pirates in morph balls in the next game? Also, don't you think the Space Pirates who try to have Metroids as pets are a little messed up in the head...?
ANSWER: Between the Ing and Dark Aether, and being plagued by Dark Samus, the Space Pirates did not have enough time for experiments. If their experiments are successful by the next installment, maybe we can see some Space Pirates in Morph Balls... It seems that their scientific capabilities are strong...[2]

Metroid Prime Hunters Logbook entry
"SAMUS has the ability to transform into a ball that can move at high speeds and access areas her bipedal form cannot. To enter the alt-form, tap the icon in the lower corner of the touch screen. Use the +Control Pad or A, B, X, and Y buttons to move the MORPH BALL. Use the touch screen for more precise control with gentle strokes in the desired direction. BOOST by quickly stroking in the desired direction or by pressing the BOOST button."[3]

Metroid Prime Hunters Official Nintendo Player's Guide
"Samus can transform into a small Morph Ball that can move at high speeds and squeeze through the tightest of openings. It can also drop small bursts of volatile energy, which explode to damage foes or propel Samus upward."

DEACTIVATE MORPH BALL
Press A while in Morph Ball to return to normal.

Metroid: Other M manual
"Press A to go into Morph Ball mode and move around small spaces. Press A again to change back."

Super Smash Bros. for Wii U trophy description
"One of the numerous modules integrated into Samus's Power Suit. This one allows her to transform into a compact mobile sphere and explore tight spaces. In the very first Metroid game, it was known as the Maru Mari, which is just Japanese for "roll up," but it was later changed to the much-cooler-sounding Morph Ball."

Exactly how it functions is unknown, but Prime concept art shows a large ball forming around Samus from her suit's material, then shrinking down to its miniature size - in-game, a core of energy is visible through the equator between the two sides, indicating that Samus may transform into energy to fit into the smaller ball. Zero Mission design documents refer to the Chozo being capable of "unique transforming into a sphere," implying that the user's body is physically within the ball somehow.