A Moto, also known as Mousin[1], is a creature native to SR388 that is found in Metroid II: Return of Samus, Metroid: Samus Returns, and Metroid Fusion. They have a mask-like structure with horns at the top covering their faces.

In Return of Samus, their behavior is to walk to the right a set amount and then to walk to the left the same amount. Their backside is most vulnerable to attack.

In Metroid Fusion, they were infected and/or mimicked by X Parasites like the majority of the creatures on-board the BSL Station. These infected Motos have a more menacing look to their facial structure. If it sees Samus, it will charge at her. Shooting enough at its backside or shooting a Missile or Charge Beam shot anywhere on its body will kill it.

In Samus Returns they charge in a straight line towards Samus, which can be deflected by parrying it with Melee Counter. This will stun the Moto with its backside facing Samus, allowing Samus to attack the vulnerable backside. While Melee Counters are the most efficient way to deal with them, Samus can also focus on attacking its backside like in past games. Stronger Motos[2] are also introduced, which are more powerful and will immediately turn around if Samus dodges their charge up to three times in a row.

Enemies (p. 30)
MOTO
"When Samus comes close, they will dash at her. They have a hard shell that protects them from beams."

Enemies (2) (p. 15)
Moto
"This aggressive beast will charge if approached. Its hard shell protects it from beams."

Inhabitants & Eco System of SR388 (p. 17)
MOTO
"Motos are some of the more aggressive creatures dwelling inside the planet’s caverns. Their spiked helmets, which look to be made of bone, cover and protect their front half. They’re incredibly territorial and charge at intruders, using their bone spikes as a weapon. To defeat them, get behind them and shoot their unprotected parts. However, a well-timed Melee Counter is often a much more effective means of dispatching them."

Walkthrough (p. 59)
MOTO
"You encounter a new enemy in this area: the hard-headed, horned Moto. A Moto’s head carries both its best defense and best offense. Damaging it with anything other than missiles requires you to shoot it in its hindquarters, as its mask deflects almost anything you throw at it. In addition, it’s a very aggressive creature, charging at anything it doesn’t like and dealing a ton of damage if it lands a hit.

The good news is that its aggressive nature is also its biggest weakness. Every time it charges, you have a counter opportunity, either with a Melee Counter or by jumping over it and shooting it in its soft back bits. Whatever method you use to dispatch a Moto, avoid getting hit by its charge attack, as it takes a big chunk out of your health."

Walkthrough (p. 128)
STRONGER MOTO
"Stronger Motos are aggressive, even for Motos. If you manage to dodge their first charge attack, they turn around and continue charging. They can perform a charge attack up to three times before taking a breather, at which point they’re completely vulnerable to your attacks. However, don’t wait for them to finish their charge attacks, since a simple Melee Counter does the trick. Defeating them with missiles requires many more shots than regular Motos take, but a single Melee Counter allows you to down them with a shot from the Spazer Beam."

Moto as it appears in Metroid II: Return of Samus 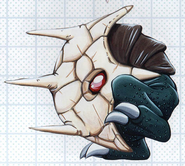 Samus facing a Moto in Fusion