A Multi-Lock Blast Shield, also known as a Seeker Missile Door[1], is a shield that has five nodes that must be destroyed at the exact same time in order to disconnect/destroy the shield. They appear as purple Blast Shields in Metroid Prime 2: Echoes and of differing appearances and use in Metroid Prime 3: Corruption and Metroid: Other M.

Seeker Missiles are required to open a door with this Blast Shield. They have been used by many races, to secure areas of importance. Some have been developed as shields for doors, while others are created for holding locks in place and so on. Their appearance varies greatly between the planets and stations they are used on. Despite the aesthetic differences, the method of dismantling them remains the same.

Metroid: Other M features the Multi-Lock Blast Shields in a considerably lesser role. There are only three within the game; one blocking the path to Sector Zero and two near Room MW in the Bioweapon Research Center. 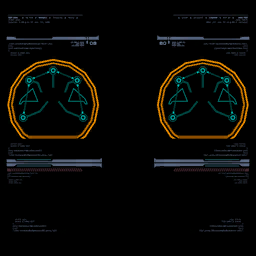 Multi-Lock Blast Shield
A simultaneous blast to all targets is required to disengage locks.

This type of Blast Shield is characterized by its multiple locking mechanisms. A simultaneous blast to all the targets is required to deactivate the locks and remove the shield.

A Federation Multi-Lock on Norion.

A Multi-Lock in Cryosphere.
Add a photo to this gallery

Retrieved from "https://metroid.fandom.com/wiki/Multi-Lock_Blast_Shield?oldid=272648"
Community content is available under CC-BY-SA unless otherwise noted.