This room is set in a dark cavern that is partially flooded. The walls and floor have a green hue; whether this is their natural color or because of a reflection is unknown. Strange reeds, rocky columns and thin stalactites are visible in the background.

At some point during the events of the Metroid Prime series, the Mysterious Statue Chamber was built to guard the entrance to the reconstructed Tourian base. A large set of Golden Statues depicting Kraid, Phantoon, Draygon, and Ridley stands in a shallow pond of water. Each statue has glowing eyes - Kraid green, Phantoon yellow, Draygon blue and Ridley red. When each boss is defeated, the eye shines and then breaks, flying upwards while the statue turns grey. This signifies deactivation of the statue once the bosses' life signs fail. When all four bosses have been killed, the room begins to shake and the statue descends into the water. Samus can stand on their former resting place to fall through four rows of blocks, to an underwater elevator below. This elevator takes her into Tourian.

Samus can visit this room at any point after collecting the Bombs, but there is little incentive for her to do so. The door locks once she enters. If she enters before all bosses have been killed, the door will unlock after a few seconds. If she has killed one or all bosses, the door remains locked until the statues have deactivated and/or sunk.

This room, as well as the rest of Zebes, becomes inaccessible once Samus uses the first Save Station in Tourian.

Golden Gateway (volume 60, pg. 10)
"This statue of the four area leaders of Zebes blocks the entrance to the new Tourian Command Center."

Volume 95, pg. 65
"The Golden Statue of bosses doesn't block the path to Tourian any longer now that you've defeated all of the boss characters. Take the elevator down into Tourian."

D. TO TOURIAN AND MOTHER BRAIN (pg. 35)
"A large conglomeration of harmless golden statues blocks the path to Tourian. Samus won't be able to get down through this section and into Tourian until all of the major boss characters have been duly eradicated." 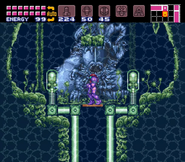