Neo-Ridley[1] (ネオ リドリー, Neo Ridorī?)[2][3], known as simply Ridley in English guides[4][5], is the tenth boss Samus faces aboard the Biologic Space Laboratories research station in Metroid Fusion. This creature is an X Parasite mimicking a clone of Ridley, which Samus had encountered previously in Metroid: Other M. It is Ridley's final chronological appearance.

The first time Samus sees the corpse of the Ridley clone, it is frozen inside the Sub-Zero Containment room on the Main Deck. After the station loses power, Samus enters the back of this room while making her way back to her Starship. As she approaches the clone's frozen remains, his eyes suddenly glow, recalling the original Ridley's previous encounters with Samus in Super Metroid. Instead of coming to life and attacking Samus, however, the clone shatters as a Core-X leaves his body and flies away.

As Samus continues exploring the station, she encounters what appears to be the Ridley clone's dry and rotting corpse in the Tourian-like section of SRX. As she approaches, the clone's eyes glow once more before the X Parasite mimicking it morphs into the being known as Neo-Ridley. This "new" Ridley has a considerably altered physical appearance from the original Ridley, including enlarged talons; this is most likely due to the Core-X attempting to create a more efficient Ridley in the same way that X Parasites had improved the original capabilities of the Arachnus.

Link to Metroid: Other M[]

The presence of both an X-infected Ridley and Zebesian Space Pirates onboard the BSL station was considered enigmatic after Fusion's release, given that the Pirates were thoroughly routed and Ridley was permanently defeated in Super Metroid. The official Fusion web site indicated that the pirates were onboard the station on a marauding mission, which initially suggested they were not Federation-preserved specimens as has often been conjectured by fans. The events portrayed in the later-released Metroid: Other M, which chronologically takes place before Fusion, clarify this mystery: after Ridley's clone was killed by the Queen Metroid and became a dried, rotting corpse, the Galactic Federation intervened in the game's ending. When Samus returns to the BOTTLE SHIP some time later, the corpse had vanished from where she found it. The Federation would eventually send the Ridley clone's remains to the BSL station to be preserved.

Considerable evidence supports the conclusions made by Other M; for example, the Ridley clone's corpse in Other M is similar in color to the X-mimic in Fusion. Also, Ridley's clone would have been extremely fragile after being drained by the Queen Metroid, which certainly explains why the frozen corpse shatters when the Core-X leaves it. This theory is further supported by the presence of another specimen, codenamed Nightmare, aboard the BSL station; Nightmare was also originally encountered on the BOTTLE SHIP and could easily have been transferred to the BSL in the same manner as the Ridley clone. The presence of Zebesian Space Pirates in both titles makes it unclear if the previously-mentioned marauding mission (likely to recover Ridley's corpse) was retconned out of existence, as the cloned variants featured in Other M could have been transferred to the BSL as well. Samus Aran also believed that the Space Pirates were completely destroyed after the explosion of Zebes, making it a more likely explanation.

Neo-Ridley will attempt to ram himself into Samus, try to grab Samus with his talons, and shoot gigantic homing fireballs from his mouth. He also uses his classic tail attacks first seen in Super Metroid, which primarily involves spinning his tail to serve as both an offensive and defensive measure; when Samus is facing the creature, the tail attack will spin and be aimed directly at her like a whip. If Samus is facing the creature from behind then the tail attack will spin once and be used in a manner similar to a pogo-stick, following her general direction. His large size makes it difficult for Samus to evade him, requiring her to do a fair amount of maneuvering. Should Samus be caught by the creature's claws, her energy will be steadily drained until she inflicts enough damage to escape the creature's grip.

All the battle involves is repeatedly firing Diffusion Missiles or the Charge Beam against the creature, considering that unlike most powerful enemies Samus faces, Neo-Ridley does not have a specific weak spot (like Ridley from Super Metroid, any part of his body can receive damage except the indestructible tail). The Charge Beam is the preferred method as it contains the Plasma Beam; this allows it to pass through Ridley and causes continuous damage. When dealt with enough damage, he'll utter an long shriek while having his eyes shut. After one of these long shrieks of pain, the creature will tend to shift attacks at times, giving him some form of predictability as to what to expect next.

As he takes more damage, Neo-Ridley will change colors from blue to purple to red. Once Neo-Ridley is defeated, he will let out one final long screech before transforming into a Core-X (like almost every other boss on the BSL station). Once Samus absorbs the Core-X, she obtains the Screw Attack, the second-to-last power-up on the station.

"Neo-Ridley was born when an X parasite absorbed Ridley's genes."

Samus behind the frozen Ridley clone.

Samus sees the rotting corpse of the Ridley clone.

The rotting corpse transforms into Neo-Ridley.

Neo-Ridley while low on health 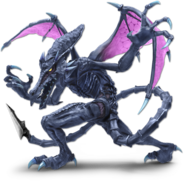