Nightbarbs are two species of airborne creatures with the same name encountered in both Metroid Prime 2: Echoes and Metroid Prime 3: Corruption.

In Echoes, they are small, flying creatures with three wings. These Dark Aetherian Nightbarbs are primarily found in the Dark Agon Wastes on Dark Aether. They travel in packs to scare off their primary predators, the Hunter Ing. Some groups can be found surrounding platforms, making them a nuisance since Samus can both sustain damage and fall off the platform when attempting to pass, requiring her to kill many of them before she can safely cross it. At the same time, however, these Nightbarbs can be more of a utility than an enemy; because of their weak nature, they can be killed with the most basic of weapons and in mass numbers, making them yield many Energy Capsules and Missile Ammo. They can only damage Samus if she comes into contact with them. The Emperor Ing will also sometimes summon Nightbarbs to use as a minor barrier, and to feed upon their energy.

They seem to have two counterparts in the same game: Airthorns and lightSwarm.

In Corruption, there are non-Darkling Nightbarbs inhabiting Bryyo that also travel in packs. These Bryyonian Nightbarbs travel in flocks and are non-aggressive. Like those from Echoes, the only way to sustain damage from them is for Samus to collide with them, and they also have the potential to knock her off a cliff. Their scan mentions they are covered in a field of energy that will explode when they come in contact with another organism, which harms the target, but kills the Nightbarb, much like how Earth's bees' stingers end their life. Also on the planet are Phazon Nightbarbs, which are Nightbarbs mutated by Phazon; they can fly incredibly fast, making them impossible to hit individually, but can be killed by shooting their combined energy attacks.

Nightbarbs are strangely present on Urtraghus as well, occasionally flying out of the transit system tunnels. Though it is difficult to determine their appearance during gameplay, a precise inspection indicates they are in fact Nightbarbs.

Nightbarbs are small airborne darklings. Smaller and weaker than a Hunter Ing, a Nightbarb will travel with a large pack to increase its odds of survival. This is wise, since their primary predators are Hunter Ing. 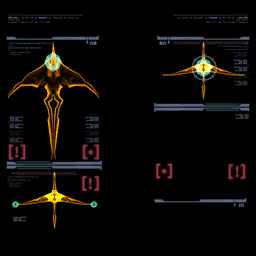 Nightbarbs are predators, traveling in packs to search for prey. They have the ability to generate a protective field of energy around their bodies. The ability is unstable, however. If the field makes contact with another life force, it will overload. This also consumes the life force of the Nightbarb, much like a bee's sting ends its life. 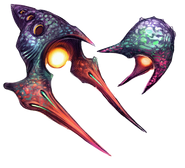 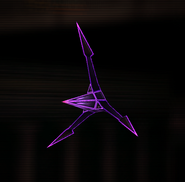 A Nightbarb in the logbook 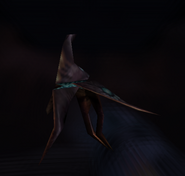