Nintendo Land (ニンテンドーランド, Nintendō Rando?) is a party game for Wii U that integrates Miis into a Nintendo theme park of games. These games are based on 12 Nintendo franchises, each one providing unique gameplay experiences for either one or up to five players. The multiplayer centric games feature Asymmetric Gameplay, where one player uses the Wii U Gamepad to play the game in a certain way, while the other players use Wii Remotes for a different type of gameplay within the same game.

A Metroid series-themed game called Battle Mii was shown at E3 2011. The following year, at E3 2012, Nintendo announced that it would be one of 12 series-based Mii games in Nintendo Land, now renamed as Metroid Blast. In this game, Miis dress as the characters from one of the included series in a Nintendo theme park (which includes a statue of Ridley, among other purchasable statues) to play a related game using the Wii U GamePad and Wii Remotes. Samus Aran's Gunship can appear in the park plaza, [2] as well as a Metroid statue.[3]

The game is one of the 12 Nintendo-themed subgames accessible from the main hub of Nintendo Land. It is a multiplayer competitive and cooperative shooter game for up to 5 players - four of them controlling controlling Power Suit, Fusion Suit, Gravity Suit, etc. dressed Miis using Wii Remote+ & Nunchuk and the remaining player piloting Samus' Starship with the Wii U Gamepad. This attraction is one of the few that also allows solo play, with either the Wii Remote+ & Nunchuk or the GamePad available for the lone player.

The Wii Remote players play on the main TV with pointer controls while the Gamepad user plays on his/her own screen using a dual analog and gyro configuration to control the ship's altitude, aiming, and movement at once.

Items appear inside a floating crystal, shooting the container (or flying through it) allows players to collect them:

Other items include the Ice Beam upgrade that replaces the default charge shot for a freezing shot that charges and travels faster than the missile/bomb shot (but makes no damage), and if the user has failed a mission multiple times, Monita will offer an extra health helmet that doubles the users hit points.

The game presents a variety of classic and original enemies to defeat in Assault Mission mode. Every attraction in Nintendo Land has a distintic aesthetic theme (Zelda Battle Quest has everything made of cloth, Takamaru's Ninja Castle is made of Origami, etc.), and in Metroid Blast, being a Sci-Fi game, all the enemies are animatronic versions of the real creatures. All of them have a weak spot in the chest, represented by a "On-Off" button:

To damage it, the players have to hit Ridley in his many weak spots, located in its mouth, chest, tail, and hands. Once all of these hit spots have been damaged enough, another large weak spot appears in its back side, and this spot is the one that lowers Ridley's health. This sequence has to be performed thrice to defeat him. Ridley also comes with an Ice version (his energy attacks get replaced by freezing ones), and in one mission, both Ridleys will fight the players at once. The final bonus mission has Ridley teaming up with Kraid for one last boss fight.

In Assault Mission, 1 to 5 players can engage in various challenges as a team, many of them involving defeating waves of incoming enemies. The 10th missions is a boss battle agains Kraid, in which he is built as a totem with multiple sections and weapons, situated in the center of the stage. One of the later missions has Ridley as an assist enemy for the actual targets. The final mission is a boss battle agains Ridley himself; his attacks include Missiles, Bombs, Beams, and retractable arms and tail attacks. Altough there is no friendly fire for the uncharged shots, blasts from the Starship will stun ground players. The charged shots can damage other players and the shooters themselves. On-foot players cannot shoot at the gunship, instead they will automaticaly grapple onto it and hang from underneath, they can still fire while doing so. If either player is defeated during the match, they will wander around as an unarmored Mii character, and getting a heart will return them to the game. When playing alone with the Gamepad, the TV will be used as a "LIVE FEED" style camera, showing the action from different angles and places.

Surface-Air Combat and Ground Battle are competitive game modes, where 2 to 5 players (2 to 4 in Ground Battle) battle against each other in a traditional Deathmatch game. On Ground Battle, only WiiRemote players will participate, with the Gamepad acting as the "LIVE" camera. Completing levels from Assault Mission unlocks additional set rules for both these game modes.

The score for Nintendo Land, and its many attractions, was composed by Ryo Nagamatsu. Like the different visual themes of the minigames, each attraction has a unique soundtrack style. Metroid Blast' soundtrack is fully orchestrated, with some synths added to Ridley's theme. Most of the themes are remixes of classic Metroid tunes, like Metroid/Zero Mission Brinstar or Super Metroid Lower Norfair. The original NES Metroid Title Screen theme is used when selecting the game modes.

The pachinko-style machine in the center of the park uses coins collected in the park attractions in exchange for prizes that are displayed in the central plaza. Among these 200 prizes are several Metroid Blast items and 8 songs for the Jukebox. Some of these items have never actually been featured in a Metroid game. When activated, the prizes usually perform a certain function, while a description flashes onscreen and Monita reads their name.

The Metroid theme park entrance is on the left, featuring Samus's helmet as a logo.

A winged Ridley appears in the main hub of Nintendo Land.

The icons representing various attractions in Nintendo Land, Samus' helmet among them. 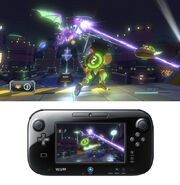 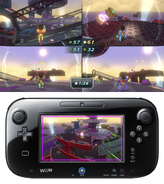 Retrieved from "https://metroid.fandom.com/wiki/Nintendo_Land?oldid=189588"
Community content is available under CC-BY-SA unless otherwise noted.