Nintendo Monopoly is a 2006 boardgame based on the Parker Brothers' 1935 game of Monopoly featuring various Nintendo series.

The Metroid series represents the orange properties: Samus Aran (New York Avenue-$200), Ridley (Tennessee Avenue-$180), and a Metroid (St. James Place-$180). It should be noted that Meta Ridley is actually depicted on the "Ridley" property, and a Tallon Metroid is depicted on the "Metroid" property. Samus is displayed on the box's cover art, based on Metroid Prime 2: Echoes, and the board's background depicts dozens of games, including Metroid and Super Metroid.

An updated version was released in 2010. The Samus Aran and Ridley properties had updated art from Metroid Prime 3: Corruption, with the latter now represented as Omega Ridley. In addition, the Metroid property was replaced with the Morph Ball, the Blue Falcon property (Pennsylvania Railroad) was replaced with the Gunship, and a metal piece representing Samus Aran's helmet was also added. 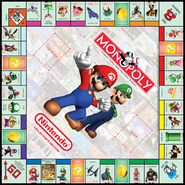 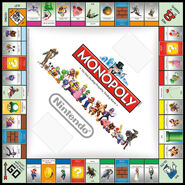 Samus's helmet piece in the 2010 version
Add a photo to this gallery
Retrieved from "https://metroid.fandom.com/wiki/Nintendo_Monopoly?oldid=262142"
Community content is available under CC-BY-SA unless otherwise noted.