This article, image or section covers Japanese media that has not yet been fully translated into English.

The Nintendo Official Guidebook for Metroid Other M (任天堂公式ガイドブック, Nintendō Kōshiki Gaidobukku?) is the official Japanese strategy guide for Metroid: Other M. Like the Japanese version of the game's boxart, it features a red slipcover with Samus Aran's face on it, in her Varia Suit. The actual cover of the book features the younger Samus's face on it, from her time with the Federation Army. Unlike the game's slipcover however, Samus's Visor on the guide's slipcover is not translucent.

The guide is split into several chapters: Story & Cast (for the characters), System (for the controls), Tactics (a walkthrough of the game with a separate chapter for the climax of the game), Data (for enemies) and World. In the middle of the book is an editor's note warning about the Pyrosphere door glitch.

The guidebook features exclusive artwork of enemies and characters, a series timeline including the Prime series (the events of which are not alluded to in-game), and a "confidential" section at the back of the book that elaborates on plot elements. This confidential section confirms that James Pierce is the Deleter, that he killed K.G. Misawa, and that MB killed James after he attempted and failed to kill her. The guide also names the Ring Beam Units, Pow, Wadge and Zuru creatures as such, and reveals that Sovas are related to Geemers. The timeline includes all original releases of each game up to Other M, as well as re-releases and compilations such as the New Play Control! versions of Metroid Prime and Metroid Prime 2: Dark Echoes, the Famicom Mini version of Metroid, Metroid Prime Trilogy, and even branches out to cameos in other games. These include the Super Smash Bros. series, Kirby Super Star and Kirby's Dream Land 3, and the WarioWare games.

Translations for the pages below can be found by clicking on the respective gallery files.

The cover of the book.

Artwork for the title page.

A recap of the previous Metroid storylines.

Artwork for the System section.

Artwork for the Tactics section.

Artwork for the Final Mission section.

Artwork for the Data section.

Artwork for the World section.

The first page of the confidential section.

Page relating to the after-credits sequence.

Page relating to the Phantoon battle.

Page relating to the countdown sequence.

Page talking about MB, which reveals that James Pierce is the Deleter.

This page summarizes cameos of Metroid in the Super Smash Bros., Kirby and WarioWare series. 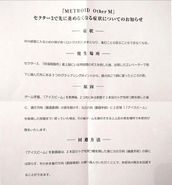 Metroid.jp
Add a photo to this gallery
Retrieved from "https://metroid.fandom.com/wiki/Nintendo_Official_Guidebook_for_Metroid_Other_M?oldid=271284"
Community content is available under CC-BY-SA unless otherwise noted.