Wikitroid
Register
Don't have an account?
Sign In
Advertisement
in: Pages with script errors, Pages in the real-life POV, Consoles, Nintendo Switch

The Nintendo Switch (codenamed NX in development) is a video game console developed by Nintendo, and the company's seventh major home console. Officially unveiled in October 2016, the console was released worldwide on March 3, 2017. Nintendo has sought to acquire heavy support from third-party developers and publishers to flesh out the Switch's game library alongside Nintendo's own exclusive titles. Over 100 titles were in development by 70 developers as of January 2017.

Metroid Prime 4 was announced as in development for Nintendo Switch at E3 2017. Kensuke Tanabe, the producer of the Prime Series said in 2015 that the next proper Metroid Prime title would more likely release on the Switch (NX at the time) than the Wii U, and suggested it would involve a time-shifting mechanic and/or Samus Aran confronting Sylux.[1] In January 2017, Reggie Fils-Aime hinted that Metroid would have a future title on Switch, saying to "talk to me in a year and let's look back and see what's happened."[2] Metroid Dread, another long awaited Metroid title, was released on October 8, 2021 on Nintendo Switch.

The first announcement of the Switch occurred during another announcement, of Nintendo's partnership with Japanese mobile firm DeNA on March 17, 2015. Nintendo referred to the console under the codename "NX", and described it as a "brand new concept".[3] Information from then on was sparse. The next announcement was not given until an investor's meeting in April 2016, when Nintendo announced that the NX would see release worldwide in March 2017.[4][5] While Nintendo did not unveil the NX's hardware at E3 2016, it did announce that The Legend of Zelda: Breath of the Wild, which was originally announced as a Wii U-exclusive, would also be released for the NX. Shigeru Miyamoto explained that the lack of information was due to company concern that competitors could copy ideas from the NX if they revealed it too soon.[6] Rumors began to surface surrounding the nature of the console, including its use of Nvidia Tegra hardware, use of cartridges similar to Nintendo's handheld consoles, and being a "hybrid" device intended for both home and handheld use.[7][8][9]

On October 20, 2016, Nintendo officially announced the console under the official name Nintendo Switch, through a three minute trailer that demonstrated the hardware's nature as a hybrid device.[10] It offered little information about hardware specifications, the Switch's release date, price or games that would be available for it. This information was revealed at a press conference livestreamed in Tokyo on January 12/13, 2017.[11]

The Switch is considered by Nintendo as a "hybrid" console, with both home and handheld play being possible. It is designed primarily as a home console with the main Console unit inserted onto a docking station to connect to a television. Alternatively, the Console can be removed from the Dock and function similar to an iPad through its LCD touchscreen, or placed in a standalone tabletop mode to be playable by several people. The Switch's most distinguishable features are the Joy-Con controllers, which replace the Wii Remotes. Joy-Cons are detachable controllers that can be either attached to a "Grip" to provide a traditional home console gamepad form, attached on either side of a main unit for handheld play, or used individually in the hand like the Wii Remote. The Switch supports both physical flash ROM cartridges and digital content for games and software, and does not use region locking, unlike previous Nintendo consoles.

A revised Switch model, OLED, was released on October 8, 2021, the same day as Metroid Dread. It features a larger 7 inch OLED screen, wider kickstand, built-in speakers, a LAN port in the dock and 64GB of internal storage, and can be purchased in white or neon red/blue. Gameplay footage from the Dread Announcement Trailer appears in the OLED model's trailer.

Metroid games for the Nintendo Switch[]

These games are both available for free with Nintendo Switch Online.

Metroid cameos for the Nintendo Switch[] 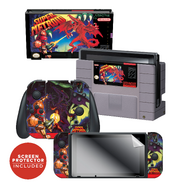 Super Metroid Skin & Screen Protector Set, a licensed product first offered in 2018 and later added to Nintendo.com. The Switch dock is made to resemble a SNES Super Metroid cartridge.[12] 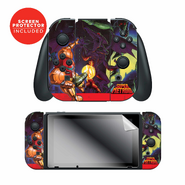 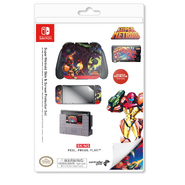 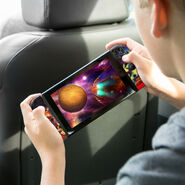 The Switch is displaying a superimposed image from Metroid: Samus Returns (for the Nintendo 3DS) in this photo.[13] 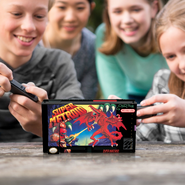 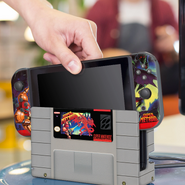 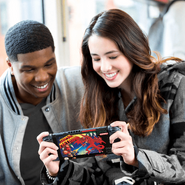 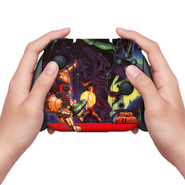 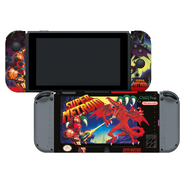 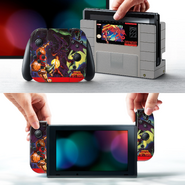