Wikitroid
Register
Don't have an account?
Sign In
Advertisement
in: Pages with conjectural titles, Rooms, Sector 6,
and 2 more

The "nocturnal cavern" is a large room in Sector 6 (NOC). It appears in Metroid Fusion.

This is the lowest room in all of Sector 6. It is an enormous cavern with a basin, which is filled to the brim with water. Above this are three midair elongated platforms. Extending into the background are numerous caves and aquifers, suggesting the sector is larger than it appears in-game. Despite the cave-like setting, there is some evidence that it is not entirely natural, as parts of a metal ceiling can be seen peeking out from the cave rock.

Samus comes to this room after finding a Core-X destroying a Data Room from which she was to obtain Varia Suit data. As she nears the exit door, a massive Barrier Core-X appears and forces Samus to do battle with it. The water presents a hazard should Samus fall into it, as it slows her movements down. She must carefully evade the creature's attacks and make use of the midair platforms to defeat it. Once it is dead, Samus can absorb its Core-X to recover the Varia Suit data it stole. After this, there is little incentive for Samus to revisit this room or area of Sector 6, unless she missed any of the nearby Missile Tanks.

This cavern is entered from a Data Room (via Green Hatch), in which Samus found the Barrier Core-X destroying the data uplink itself. It leads into a tall shaft (via Gray Hatch) with an upper ledge and stalagmite.

10. BOSS BATTLE (pg. 51)
"When you reach the Data Room, you'll watch one of the creatures destroy the computer uplink. Follow it to the next room and go up against a large, round monster. Hit the creature with Charge Beam shots to both damage it and make it bounce away from you. Avoid it while it's flashing, then hit it again when it's solid. After you destroy it, a Core-X will pop out. Hit the shielded parasite with Missiles then absorb the stolen Varia Suit data."

"Jump from platform to platform as you avoid contact with the beast and hit it with your Charge Beam when you have a clean shot."

Page 108
"When you enter the [Data] room, you see a strange Core-X sitting on the pressure pad. You can shoot it, but nothing will stop the Core-X from stealing the Varia Suit data. Pursue the Core-X into the next room.

Jump to the second platform from the left, where you can quickly adjust your aim and shoot the Core-X with Charge Beams as it flies around the room. If the Core-X bumps you, use the + Control Pad to float back to the platform (dropping into the water wastes time and leaves Samus vulnerable to attack). When the Core-X changes shape, switch to missiles. You'll need to jump around more and scoop up floating X to maintain your strength as you keep firing. When the remaining Core-X turns red, it is one shot away from destruction.

When the Core-X dissolves, a purple X cluster remains. Grab it to regain the Varia Suit, giving Samus the ability to survive extremely low temperatures. Now you need not worry about blue X.

With Samus snug and warm in her new Varia Suit, hop across the platforms and exit to the right." 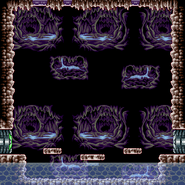 The Core-X.
Community content is available under CC-BY-SA unless otherwise noted.
Advertisement