The "Norfair Jump Room" is a massive room in Norfair. It appears in Super Metroid.

This is one of the lowest rooms in Norfair, and potentially the lowest of upper Norfair. Despite this, it is not superheated, making it safe for Samus without her Power Suit (this is most relevant on a Low Percent Run). The room is divided into a humongous, wide vertical chamber and a more cramped passageway, into which the room is entered.

The former portion is filled with obstructions on the floor. A large wall to the left is made of Boost Blocks, with a thin gap between it and the floor. Behind this is an upwards ramp built out of a tilted stone column. It gives way to the massive main chamber, which is partly filled with scalding-hot lava. Five midair platforms and four suspensor platforms are on the surface of the lava, with an incline on the side of the lava pool giving Samus a means of escape if she falls in.

Samus's destination is a high ledge on the upper left wall of the chamber. To reach it, she must clear the obstructions near the entrance with a Power Bomb, eliminate any enemies in her way and then run to the right, then left until her Speed Booster activates. Once she reaches the end of the ramp, Samus must make a long jump to the left to reach the ledge. Behind the door is the Grappling Beam.

Missile Tank
This item is on a ledge on the upper right, above the ramp. To reach it, Samus can grapple across several Trippers near the ceiling once she returns with the Grappling Beam. Alternatively, Samus can run up the ramp, press Down, drop into the lava and Shinespark upwards. If she Shinesparkers atop the ramp or on the outcropping under it, she will hit the underside of the ledge where the tank is. Once Samus collects the item, she can roll into a tunnel to her right to drop through a short shaft and Pit Block back onto the "runway".

Long Jump (pg. 18)
"Clear away the blocks with Power Bombs, then use the Speed Booster to run to the edge of the ramp and jump."

Grappling Trick (pg. 18)
"Use the Grappling Beam to swing off the flying creatures and cross over to the Missiles."

B. BOOST ON THE SPOT (pg. 68)
"To get these Missiles will take both speed and skill. Note the point directly below your target, then back up far enough to activate Samus's full Dash speed. Dash to the jump point, press Down then the Jump Button."

C. FLYING (pg. 69)
"Explode a Power Bomb beneath the door to vaporize the blocks, then Dash from the far right. As you race up the ramp, push the Jump Button. Samus will soar through the air to a distant ledge and the Grappling Beam.

UP, UP AND AWAY! (pg. 43)
"Having cleared a path through the rocks in the corridor, you now have the opportunity for a breath-taking running jump. Go to the right hand wall, then turn and hit the speed boost. Press jump just as you reach the ramp to the left (you should be at full speed at this point) and fly long and high onto the high left hand ledge." 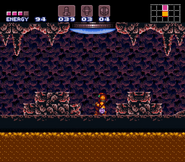