Very High (Exceeds the power of the Plasma Beam in Metroid Prime 3: Corruption).

Passes through Phazite. Can be used in conjunction with X-Ray Visor.

The Nova Beam is a high-frequency beam used in the Pirate Homeworld's mining facility. The Space Pirates had developed it as both a weapon system and to be installed in mining operations involving Phazon ore. Samus Aran stole the Beam from the Main Cavern in the Pirate Mines, shutting down the Mining cannon that was cutting and extracting Phazon deposits in the facility.

It is the final beam Samus obtains in Metroid Prime 3: Corruption.

Some enemies are highly vulnerable to the combination of the X-Ray Visor and the Nova Beam. These enemies include those that use Phazite as armor, such as Phazon Metroids, Metroid Hatchers, Commando Pirates, and Berserker Knights, which can be killed in one shot. To accomplish this, Samus must first lock onto the enemy with the X-Ray Visor, which will then display a zoomed-in view of the enemy with one or more glowing spots.

Aiming at these glowing spots with the Nova Beam will instantly kill the enemy by hitting their head, or possibly their brain, through the armor. This tactic can be especially helpful because all of these enemies are difficult to defeat using conventional methods. A perfect example is the Metroid Hatcher, which normally requires a lengthy battle in which its four tentacles must be ripped off with the Grapple Lasso. Using the X-Ray Visor and the Nova Beam together can kill it in a single shot by shooting directly at its heart. However, this tactic can become impractical on higher difficulties, as the various enemies will enter Hypermode more often and scramble the X-Ray Visor. The Nova Beam's traits also allow it to pierce through a Phazon Metroid's membrane and directly hit its nuclei, resulting in a quick kill.

The Nova Beam uses the same technology as the mining systems found throughout the Pirate Mines; it appears the system's mining beams are advanced Nova Beams. Samus' Varia Suit is able to adapt the Pirate technology into a usable, mobile weapon.

The Nova Beam can also unlock Orange Doors since Corruption uses a beam-stacking system, integrating the Plasma Beam into the Nova Beam. The Nova Beam keeps all the attributes of the beams it replaces, including the Power Beam's high rate of fire and the Plasma Beam's ability to incinerate enemies and weld broken circuit boards. The Arm Cannon takes the same shape as it did for the Wave Beam and the Light Beam (from Metroid Prime and Metroid Prime 2: Echoes respectively). Also when Samus charges the Nova Beam, three orbiting spheres of energy surround the shot; a good indicator that the shot is fully charged.

The exact mechanism by which the Nova Beam operates is never explained. However, its properties indicate that it is some form of advanced laser weapon that employs high-frequency electromagnetic radiation- given its compatability with the X-Ray Visor, it is likely that the laser itself operates in the x-ray portion of the spectrum. This would make it similar in mechanism to the Light Beam from Metroid Prime 2: Echoes - both weapons can pierce enemies and set them on fire, and share an Arm Cannon shape. It would explain the name of the weapon, as well: true supernovae are capable of releasing intense levels of high-frequency radiation, and are thought to be the cause of gamma ray bursts.

Although such a laser would demonstrate the Nova Beam's properties of extreme heat, penetrative ability, and pinpoint accuracy, the projectiles it fires would likely be completely invisible. The green glow of the Nova Beam could instead be plasma caused by the interaction with the atmosphere, or (as small, powerful, high-frequency lasers of this type are beyond conventional technology) some other effect unknown to terrestrial science. 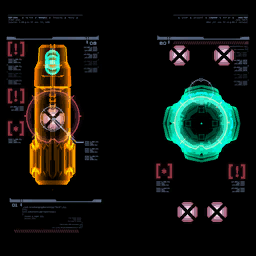 The Nova Beam is a high-frequency Beam that can shoot through certain objects.
Press

to shoot the Nova Beam. Press and hold

to charge the Arm Cannon, then release to fire a charged shot.

The Nova Beam can shoot through objects made of Phazite and hit weak points or hidden targets.
Many of these can be found by using the X-Ray Visor.
The Nova Beam retains all the abilities of your previous Beam weapons.