Old Bird is an elderly Chozo of Zebes.

A earlier version of Old Bird made his debut in the non-canonical Super Metroid comic, and is also depicted in the Nintendo Official Guide Book for Super Metroid. Old Bird's first in-game appearance is the Japanese version of Metroid Fusion's Child Mode endings. Old Bird is prominently featured as a character in the Metroid manga. In all regions, he also appears in a flashback of Metroid: Zero Mission.

Old Bird, along with several other Chozo, arrived on K-2L to negotiate a supply of Afloraltite with Chief Rodney Aran. During the meeting, Old Bird met the three-year-old Samus Aran, who asked for help retrieving a backpack stolen by Pyonchi. Old Bird suggested that Samus become friends with Pyonchi.

Shortly afterward, Old Bird returned to K-2L after a Space Pirate attack and found Samus, the sole survivor. He brought her to Zebes, a decision that upset Grey Voice. He thereafter acted as a foster father to her: it was he who decided to infuse her with Chozo DNA, train her, and give Samus the Power Suit to defend the universe. As seen in Zero Mission, Old Bird brought Samus to the Ruins Test in Chozodia, and she drew herself, Old Bird, and Grey Voice on the bottom of the mural; this drawing can still be seen during Samus's adulthood.

After Samus left Zebes to join the Federation Police Force, Old Bird held a council with the other Chozo elders, where he revealed the existence of X Parasites and the Metroids engineered to counter the X. During the meeting, Zebes was attacked by a Space Pirate flagship. When she returned to a ruined Zebes as a Federation Police Force officer, Samus heard Old Bird's final communication before fleeing with (most of) the rest of the Chozo.

In the non-canonical Super Metroid comic, Old Bird is living on the Nest. Armstrong Houston and Samus arrive from Zebes after her Power Suit is damaged. As Samus recovers, he explains the story of Samus and the Chozo to Houston. Samus then insists to Old Bird that she use a Power Bomb to heal all her wounds. Despite his fear of Samus's greater injury if the tactic fails, Old Bird goes ahead with Samus's plan, and it succeeds.

While this story is considered non-canon, Old Bird is one of several story elements (such as Chairman Keaton and the Space Pirates' attack on K-2L) that were later integrated into canon through the Magazine Z manga.

Old Bird appears briefly in Samus & Joey: Volume 2 chapter 8. Samus remembers Old Bird, Virginia, and Rodney as she tells Joey Apronika about her own fears, declaring that she fights even when she is afraid so that she will not lose anyone else important to her.

Old Bird, as seen in the Super Metroid comic. 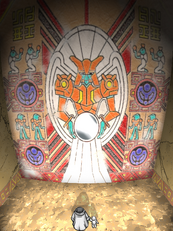 Drawing of Old Bird, a young Samus, and Grey Voice

Metroid: Zero Mission GBA SP (with Ruins Test drawing in corner.)
Add a photo to this gallery
Retrieved from "https://metroid.fandom.com/wiki/Old_Bird?oldid=276294"
Community content is available under CC-BY-SA unless otherwise noted.