Location of 1 Pirate Data entry, battle with an Elite Pirate

Omega Research is a room in the Phazon Mines. It appears in Metroid Prime.

This room has two levels. Samus enters from the higher level and can jump down to the lower one, but must deactivate a barrier using the Scan Visor to return the higher one. On the lower floor is a Pirate Data entry. The second time Samus goes through here, she fights an Elite Pirate. There is a Bendezium structure on the higher level that gives access to a Map Station.

A Hidden World can be found in this room: [1]

Computer screen
"Metroids from the initial batch have matured to Hunter phase.
Be advised that the Hunter Metroid has a siphon-tentacle. It can attack with it from a distance, as opposed to the close-combat tactic used by younger Metroids."

Computer screen
"All magnetic rail system access must be approved by Security."

Wall terminal
"Metroids are not responding to synthetic sustenance.
We have reason to believe they only gain nourishment from active bio-energy sources."

Wall terminal
"Security breaches in multiple areas.
Unauthorized usage of resources continues. Patterns suggest these resources are being stolen by the Hunter. Increase monitoring of all resource facilities immediately."

Wall terminal
"Recon Teams are searching for the Hunter's gunship.
Science Team believes it employs a sophisticated cloaking device beyond our capabilities. Aside from dumb luck, we may never discover its location. We must contain or eliminate Aran. Failure to comply with Command decree is not an option."

Wall terminal
"All available troopers report to Mine Security Command."

Computer screen
"Our enemies will tremble before the might of our Elite forces."

Computer screen
"Death to the Hunter. Death to all who oppose us!"

Omega Pirate
"Log 11.232.8
Elite Pirate Upsilon's propensity for Phazon has enabled our research team to infuse it far beyond our safety restrictions, and the results have been extremely encouraging. Its constant Phazon diet has increased its mass exponentially, but it has retained all mental faculties and shows dexterity with all Elite weaponry, including Plasma Incendiary Launchers and the Chameleon Manta issued for cloaking purposes. Elite Pirate Upsilon exhibits miraculous healing abilities; when injured, it seeks out Phazon deposits and coats itself in the substance, which instantly mends the creature's wounds. The subject, which we are code-naming Omega Pirate based on these developments, shows potential to be a new standard for our armies. Our only concern at this point is its potential overdependence on Phazon." 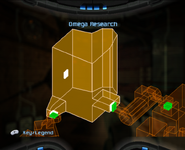 Room seen on the Map.
Русский
Community content is available under CC-BY-SA unless otherwise noted.
Advertisement