Wikitroid
Register
Don't have an account?
Sign In
Advertisement
in: Featured articles, Pages with conjectural titles, Suits,
and 4 more
English

Restores Ice Beam
Samus Aran received the unofficially-named "Omega Suit" at the end of Metroid Fusion. The suit is not named in the game, the code, or any strategy guides, and does not appear in the Samus Screen; its fan nickname refers to its status as the final Fusion Suit upgrade, received during the battle against the Omega Metroid.

During the events of Fusion, Samus was infected by the X Parasites and much of her Power Suit was surgically removed. She was given a vaccine made from the DNA of the Metroid baby that saved her life. While this meant that Samus was now completely immune to the X Parasites, it also gave her the Metroid's weakness to cold. Because of this weakness, the Adam computer conjectured that the new Fusion Suit would reject the Ice Beam upgrade so the Galactic Federation never tried to create a downloadable version for Samus.

Toward the end of the game, Samus defeated the SA-X, a copy of Samus born from the parts of her Power Suit that was surgically removed after her initial infection. Before she could absorb the Core-X left behind by the SA-X, it escaped. As Samus attempted to return to her Starship, she was attacked by an Omega Metroid in the Docking Bays. She fought back, but could not harm the beast without the Ice Beam. When all seemed lost, the SA-X intervened and attacked the Omega Metroid with its own Ice Beam. However, it was still weak from its earlier battle with Samus and was quickly overpowered.

This time, Samus was able to absorb the SA-X's Core-X, giving her Fusion Suit one final upgrade. This new suit restored her Ice Beam, fully removing her vulnerability to cold and allowing her to withstand the Omega Metroid's attacks. The upgrade changed the Fusion Suit's color scheme to orange-on-yellow, resembling her old Varia Suit. These effects are the results of Samus literally absorbing herself prior to her infection, surgery and vaccination.

In Metroid Prime, this color scheme served as the Phazon Suit with the Fusion Suit activated for use. However, it had a blue visor instead of the green visor from Fusion.

On page 61 of the special edition Metroid Mission Logs art book, concept artwork for Metroid Dread shows Samus with various suit designs using the classic Varia Suit color scheme, with yellow as the suit's secondary color instead of white. The first of these suit designs is one that appears to be an updated version of the "Omega Suit".

The suit in the ending of Metroid Fusion.

Without the helmet on.

Samus remembers her parents while in the suit 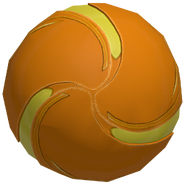 Samus poses in the suit during Prime.

The suit being worn in Prime.