An on-screen appearance[1] is a short animation for fighters in a Super Smash Bros. match performs when the match begins. Each character has one different pose that they perform upon starting a match. Unique animations have appeared in all games except for Super Smash Bros. Melee, which has a uniform entrance animation for all characters (specifically, their trophies coming to life).

In Super Smash Bros. Brawl, owing to her being an alternate form of Samus, her on-screen appearance depicts her as having the pieces of her Varia Suit fall off and Zero Suit Samus emerging from them, in the same manner as the Zero Laser aftermath. It is also one of the few entrance animations to directly relate to gameplay, as the various pieces of the suit can be picked up by her or any other fighters to use as weapons.

Starting with Super Smash Bros. for Nintendo 3DS and Wii U, Zero Suit Samus's on-screen appearance has changed, and instead depicts Samus Aran's Gunship flying overhead and Zero Suit Samus emerging and disembarking, similar to Fox and Falco's entrance animations. This is because character transformations have been removed, therefore Zero Suit Samus is a separately selected character from Samus. 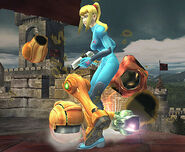 Ridley's entrance animation depicts him swooping down on the battleground. Upon landing, he briefly utters a low roar while making a threatening pose.

Retrieved from "https://metroid.fandom.com/wiki/On-screen_appearance?oldid=272193"
Community content is available under CC-BY-SA unless otherwise noted.