Oormine II is an uninhabitable terrestrial planet orbiting FS-176. During its revolution around the sun, it occupies the second, third (twice, both briefly), and fourth planetary orbits. It has one moon orbiting it. 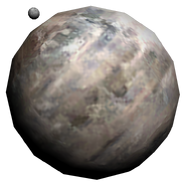