Several games in the Metroid series have featured Options, most notably those from the Prime series.


Please help improve this to including the Options of Metroid Prime Hunters and Pinball by expanding it.
Much more information can be added to this article.

In the Metroid Prime trilogy, the Options menu allows for customization of the game's controls, sound, graphics and other such features. The options change slightly from GameCube to Wii. Metroid Prime Trilogy features an omnibus option mode where customized options affect all three games.

The options menu in Prime features a spinning GameCube in the original game, but a Wii in the Wii versions.

The options are divided into four categories, plus the option to Quit Game. All categories have a "Restore Defaults" option. The categories are as follows:

Customized separately, these options tweak the opacity of the Visor and Helmet interior of Samus' Power Suit. Pushing the opacity to 0% causes the entire Heads-Up Display to disappear, although in Prime the energy meter remains opaque.

A toggling option. When Samus turns, her helmet and HUD will incline in whatever direction she is turning. Keeping this button off causes them to be still.

A toggling option, disables or enables the Hint system.

Only present in Metroid Prime 3: Corruption, the New Play Control! games and Metroid Prime Trilogy. Enables or disables the message that appears when a Bonus Credit is earned (such as obtaining a Chozo Artifact or Dark Temple Key).

Adjusts brightness of the TV screen.

Pushes the screen to the right or up.

Customized separately, adjusts the volume of sound effects and music. In Corruption Speech customization is available. Turning it up in the options in Trilogy causes this to sound: "Don't let em flank us! Keep it tight!"

Allows for customization of sound to Mono, Stereo or Dolby.

Reverses the Y-Axis in controls, so moving directions are opposite from what would normally be used (e.g. holding down on the Control Stick aims up)

Wii game-exclusive. Allows Samus to aim freely while locked onto an enemy.

Wii game-exclusive. Alters the sensitivity of the Wii Remote being aimed.

Switches the A-B buttons, so that B is now shoot and A is now jump. In Corruption, swaps the - and + buttons. Whereas - would bring up Visor Select, it will now activate Hypermode and vice-versa.

Corruption exclusive. Allows for aiming of the Boost Ball in a specific direction;

None of the other Metroid games have had options accessible in a menu. Most of the other games in the Metroid series have had few options, apart from erasing and creating new game files, and those are only possible to do on the Samus Data Screen. In Metroid: Zero Mission, the options are in fact the extras section. Apart from the option of transferring sound to headphones (which is also present on the menu screen in Metroid Fusion), the Sound Test, Time Attack Records, two Galleries of endings (with one necessitating a link between Zero Mission and Fusion) and the original Metroid.

The Japanese versions of Fusion and Zero Mission featured Adult Mode and Child Mode, which either enabled or disabled kanji text to make reading for children easier.

Super Metroid featured customizable options on the Samus Data Screen. When selecting a file, the game's options would be laid out before launching into the game. In Controller Setting Mode, the controls can be adjusted (shooting, jumping, dashing, item selecting, item canceling, angling up and down). In Special Setting Mode, two features can be enabled and disabled: the Moon Walk, allowing Samus to walk backward while shooting at enemies, and Icon Cancel, which automatically disables Missiles, Super Missiles, Power Bombs, the Grapple Beam or X-Ray Scope, if they are selected, when Samus enters a new room.

The game's text can be switched between English and Japanese.

OPTION MODE
"The Option Mode Screen allows you to change controller settings and the text language. Move the cursor by pressing Up and Down on the Control Pad buttons to the desired entry, then press the A button to carry out your choice."

(NTSC manual) "Note
If you select JAPANESE TEXT, the controller setting and special setting screens will be displayed in Japanese."

(PAL manual) "Note
Even if you select GERMAN TEXT or FRENCH TEXT, the Controller Select Screen and the Special Setting Screen display will still use English text"

START GAME
"Select this entry when you are ready to play the game."

CONTROLLER SETTING MODE
"This mode allows you to change the initial controller settings.

Move the cursor to the item that you want to change by pressing Up and Down on the Control Pad, then press the button to which you want to set the item. The control item will change to that button.

Note that if the L and R Buttons are set to any item other than diagonal firing, the control item will not function.
The initial settings of all buttons other than the START button can be changed. The new button settings changed at this screen are saved together with the game data."

END
"Return to the Option Screen."

RESET TO DEFAULT
"This option appears when you bring the cursor below END. Use it to return all of the changed button assignments to their initial settings."

SPECIAL SETTING MODE
"This mode allows you to use special settings during gameplay.

Select the items by pressing Up and Down on the Control Pad, then change the selected entries by pressing Left and Right. The settings from this screen are saved together with the game data."

ICON CANCEL
"Setting this to AUTO will deselect a special weapon when you go through a door."

AUTO
"Special items are automatically canceled when you pass through a door."

MANUAL
"Special items are not canceled until you press the cancel button. If you select a special item with the Y button pressed during game play, special items that you have used once will automatically be canceled."

"After inserting the Super Metroid cart and turning on your SNES, you'll be greeted by a title screen. From here, pressing either START or [A] will allow you to set up the game to your liking."

In Metroid: Samus Returns, the Options can be accessed from the Samus Data Screen.

Here, amiibo can be used, and their functionality is described:
"If you have a compatible amiibo, touch it to this screen."

L: "You can use a Metroid series Metroid amiibo to unlock Fusion mode. You can access this mode after beating the game. Using this amiibo while playing will mark the nearest Metroid on your map. This mark will remain active until the Metroid is defeated."

R: "You can use a Metroid series Samus Aran amiibo or Zero Suit Samus amiibo to unlock new Gallery content and up to three types of Reserve Tanks. Reserve Tanks automatically refill Samus' resources when they reach zero. They can only be refilled at corresponding Recharge Stations."

Here, the credits and ending are shown, but only if the game has already been finished.

Wii version of Prime, which features a Wii instead of a GameCube in the Options menu. 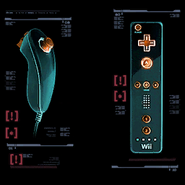 Scan images used for the Controls category of the Options in Corruption. 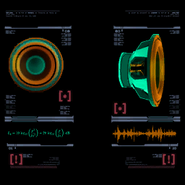 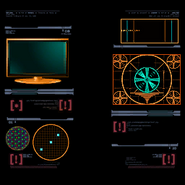 Zero Mission
Add a photo to this gallery

Retrieved from "https://metroid.fandom.com/wiki/Options?oldid=284284"
Community content is available under CC-BY-SA unless otherwise noted.