Roots that create a opening for the Morph Ball, Missile Expansion

The Overgrown Cavern is a room in the Tallon Overworld. It appears in Metroid Prime. It is a narrow cave filled with rocks and various plantlife, through which a Morph Ball tunnel passes. There is a patch of Venom Weed and a Missile Expansion in the tunnel.

Missile Expansion
This expansion is located in the centre of the room, amidst a cluster of Venom Weed. Samus can use her Beam to retract the Weed to allow safe passage and collection of the expansion without being harmed by the Venom Weed. 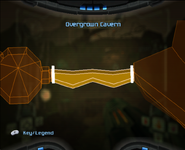 Map model of the room.