Norion, G.F.S. Olympus and Pirate Homeworld
PED Marines are Federation Marines of the Galactic Federation with a Phazon Enhancement Device attached to their suit. With the attachment of the PED, Marines can utilize Phazon to increase the power of their armor. While active, the PED enhances the attack and defense systems of their armorsuits to levels far beyond the capabilities of a normal Marine's.

The only encounters with these soldiers are in Metroid Prime 3: Corruption. The first PED marine is seen on Norion after reactivating Generator A. In the Cargo Bay, a trio of Marines is locked in battle with a trio of Space Pirates. Two of the troopers die, but the third one activates his armor's Hypermode and defeats the Pirates. Samus encounters other PED Marines on the way to Generator C while she battles the invading Space Pirates.

In certain areas within the G.F.S. Valhalla, Samus finds the bodies of several PED Marines that have been pierced by translucent Phazon vines that seem to originate from their own backpacks. This suggests that either the Marines lost control over their Hypermodes during the battle against the invading Space Pirates and were overwhelmed by their own Phazon reserves, or were simply fused to the wall and the immense corruption on the Valhalla began to take affect against the Marines armor.

While the increase in power granted by a PED is indeed considerable, it is limited by the capabilities of the original weaponry before the PED's activation. For example, a standard GF Trooper's pulse laser does poor damage when compared to Samus's Power Beam. When the PED is activated, the pulse laser does receive a dramatic increase in power, but it will still be inferior to a similarly enhanced Power Beam. Nevertheless, the PED is still a very effective device that can raise a standard trooper's threat level to approximately that of a PED-less Samus. 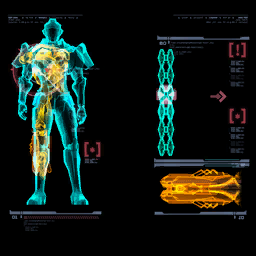 The Federation has created a system that utilizes Phazon to increase the power of the armor worn by GF Marines. While active, the Phazon unit enhances the attack and defense systems of the Armorsuit. 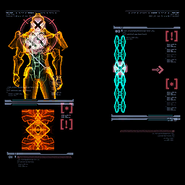 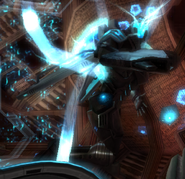 The corpse of a PED Marine whose PED malfunctioned
Русский
Community content is available under CC-BY-SA unless otherwise noted.
Advertisement