This article is about the Phazon-utilizing Suit given to Samus Aran by the Galactic Federation. For the technology that the suit uses, see Phazon Enhancement Device.

Allows the use of Hypermode and related powerups.
Capable of using Phazon to generate suit energy.
Heavy Phazon attacks cause Phazon Overload.

The Phazon Enhancement Device Suit is a Phazon Enhancement Device designed for Samus Aran. After Dark Samus corrupted her, Ghor, Rundas, and Gandrayda, their bodies began producing Phazon. The Galactic Federation rebuilt Samus' suit with their PED technology so that she may safely harness Phazon. Energy Units are replaced with Phazon Units, and exposure to some forms of Phazon will restore Samus' energy.

The PED is similar to the Fusion Suit in that it melds Samus' Power Suit with GF technology. The PED is also described as a 'fusion' between GF and Chozo technology in its description.

Thanks to the PED Suit, Samus can enter Hypermode and use Phazon against opponents. However, this costs one Energy Tank. If Samus remains in Hypermode for too long, she will overload and enter Corrupt Hypermode, meaning that she must expel her excess Phazon, and if it fills up completely she will transform into another Dark Samus, which leads to an automatic Game Over. If she is able to safely sustain Hypermode for too long, the suit's safety mechanism will automatically shut Hypermode down. Each time Samus' corruption grows, she is able to access a new ability. The initial ability Samus starts off with is the Hyper Beam, followed by the acquisition of the Hyper Ball, then the Hyper Missiles, and finally the Hyper Grapple.

After the planet Phaaze was destroyed, all Phazon disappeared from Samus' body; as a result, her PED suit reverted back to its original colors, with no discoloration or other traces of Phazon corruption. After escaping Phaaze through the wormhole, Samus' suit apparently discarded the PED upgrade, as it had returned to its usual Varia Suit configuration by the time Samus flew past the bridge of the G.F.S. Olympus.

Being an amalgamation of Chozo and Federation technology, Samus' PED Suit bears some similarities to the armor of PED Marines, with the bottom layer of plating becoming a similar blue-gray color, and the armor on the arms and legs being broken up into squared-off plates. The red of the Varia Suit's helmet and chestplate is retained, though the shape of the latter is altered significantly to accommodate the PED device. The green of the lights and visor is also deeper, and the orange armor covering the arms and legs is toned down to a deep gold. Most drastic of the changes is in the shoulder plates, which are drastically reduced in both size and shape, and have three rounded pegs protruding from each one.

The appearance of the PED Suit changes during the course of the game. It starts off with colors similar to her Varia Suit, but as her Phazon corruption level increases, the gold color scheme fades to dark blue (the red sections of her suit becoming more accentuated as a result), and glowing veins of Phazon appear in the joints of the armor plating, which get brighter and brighter as her corruption progresses. Her visor and the lights on her chestplate also turn blue and eventually an electric-blue line appears around the edges of the visor. Small amounts of Phazon energy can also be seen coursing through the veins. The suit also begins to turn from silver, gold and red to a dark blue colour, eventually resembling Dark Samus.

The effects of the corruption to Samus' body are also reflected on her facial features, as seen in the slight reflection in her Scan Visor. At first, the corruption manifests as dark blue veins on the left side of her face, along the side her nose and around her eye. As the corruption progresses, the pupil of her left eye becomes opaque, electric blue in color (the other is unaffected). The color of her irises are accentuated, and the sclera of both her eyes (the white part of the eyes) become black. Her skin also takes on a blue hue.

When facing a severe Phazon overload, the PED's Auto Vent feature has a failsafe where all of Samus' Energy Tanks are transferred into a Phazon level bar, and she is locked in permanent Hypermode. Samus must not let her Phazon bar fill up completely, or she will die of terminal corruption.

The Metroid Prime Trilogy art booklet depicts a fourth corruption stage that changes the PED Suit's appearance to look strongly like Dark Samus. This may be an image of Samus if she succumbs to the Phazon while in Corrupted Hypermode, which leads to her transforming into another Dark Samus in an alternative Game Over screen. 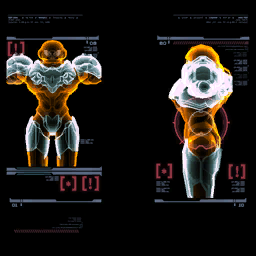 The PED Suit is a fusion of your Chozo armorsuit and GF technology.
The defining characteristic of the PED Suit is the ability to enter Hypermode: a temporary supercharged state that enhances your offensive capabilities.
Press and hold