Phantoon's chamber[1] is a room located in the Wrecked Ship in Super Metroid. It is where Samus battles Phantoon.

Phantoon's chamber is located in the lower right corner of the Wrecked Ship. It is rather unremarkable in comparison to other boss rooms in Super Metroid (and the overall series for that matter), as it is shaped like a square and has no unique features of note. The architecture of the room is similar to that of the rest of the Wrecked Ship, with green metal walls and what could be windows or screens extending into the background. There appear to be three canister-like objects lodged into the ceiling.

Shortly after Samus enters the room, Phantoon appears and the battle begins. The cramped shape of the room is a hindrance for Samus, who has less freedom to evade Phantoon's phantom eyes. Once Phantoon is defeated, the ship's power comes back online and this room becomes lit. After Phantoon's defeat, there is no requirement or other incentive for Samus to return to this room.

The room is a dead-end and only connects to a corridor with Work Robots, which is dark on first arrival but receives power after Phantoon's defeat. 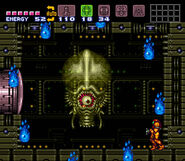 The room without power. 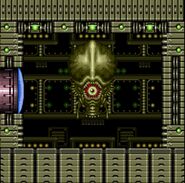 The room with power, inhabited by Phantoon 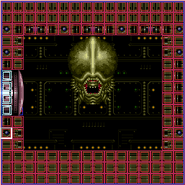 The room's 1st state, as seen in SMILE 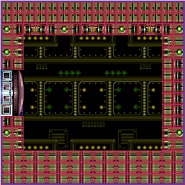 The room's 2nd state, as seen in SMILE

Nintendo Official Guidebook for Metroid Other M, page 170
Add a photo to this gallery

Retrieved from "https://metroid.fandom.com/wiki/Phantoon%27s_chamber?oldid=276261"
Community content is available under CC-BY-SA unless otherwise noted.