The Phazon Beam (ファゾンビーム Fazon Bīmu) is an immensely powerful beam weapon that solely activates near the very end of Metroid Prime.

It is the very first weapon in the series acquired by Samus Aran that is powered by Phazon. Other forms of Phazon-based beam weapons with differing properties appear in the game's sequels, Metroid Prime 2: Echoes and Metroid Prime 3: Corruption.

As is the case with the other beam weapons collected by Samus in Metroid Prime, the Arm Cannon changes its physical configuration and exhibits traits of the weapon's properties on its structure whenever the Phazon Beam is active.

The Arm Cannon's transformation for the Phazon Beam begins with the entire arm being momentarily shrouded in pitch black, leaving only a silhouette of the cannon's default shape normally used for the Power Beam. As the darkness dissipates, a blue aura covers the entire outline of Samus' Arm Cannon and its mechanical structure expands from all sides, revealing a blue Phazon mass underneath the shifted parts. Finally, blue veins form across the surface of the cannon, with some media showing them extending all the way to the shoulder. Altogether, the limb is given a grotesque, non-elegant and chaotic appearance. Each time the weapon is fired, blue rays of intense light project from the exposed Phazon mass on the Arm Cannon.

The projectiles that are fired consist of long, multiple strands of electrically-charged blue Phazon energy. These strands spread out from each other with distance and move about erratically, making them look like tentacles. The air through which the projectiles traveled are quickly coated in numerous floating Phazon particles.

The mechanics of the Phazon Beam are very unique and specific: it requires "ammo" in the form of liquid Phazon, and only by standing on a pool of the mutagen can the weapon become active. This state is known as "Hyper-mode", and firing the weapon will progressively absorb the pool of Phazon beneath her. Due to the beam's energy strands spreading out over distance, Samus must fire at her target from close range in order to have the projectiles clumped together and focused, therefore inflicting maximum damage. The Charge Beam function is incompatible with the Phazon Beam, thus simply holding down the fire button will allow her to unleash a continuous beam attack, though it will immediately shutdown if she moves away from the Phazon pool, or if said pool is completely absorbed. This will cause the Arm Cannon to revert back to whichever beam weapon was being used previously.

In Metroid Prime, the Phazon Beam is acquired alongside the Phazon Suit when the Omega Pirate's corpse falls onto Samus and bathes her in its internal Phazon, virally corrupting her Power Suit before she emerges from the Pirate's exploding body. From this point, the Phazon Beam cannot be used or seen until Samus confronts the game's final boss, the eponymous Metroid Prime. Prior to this, the weapon is merely mentioned in Samus' Notes within the Inventory.

When the Phazon Suit comes into contact with liquid Phazon excreted from the Metroid Prime's core essence, the substance is channeled into her Arm Cannon, allowing her to shoot a continuous stream of destructive energy. The Phazon Beam is the only weapon that can damage the second form of the Metroid Prime, and the liquid Phazon from which the weapon draws its power from is created by the final boss only. Shooting the Metroid Prime's core essence repeatedly will eventually overload and destabilize it, bringing an end to the battle. However, the defeated organism will steal the Phazon Suit immediately, and the Phazon Beam is lost in the process.

The Phazon Beam was the first of several Phazon-based weapons obtained by Samus in the Metroid Prime series, and can be considered as the precursor to a particular beam weapon seen in Metroid Prime 3: Corruption (further down below).

Samus is able to use a Phazon-based Beam in this game, although it is not an actual power-up. Samus can fire a focused Phazon projectile by using the Charge Beam to collect Phazon waste in the form of bullets unleashed by her doppelganger, Dark Samus. When a sufficient amount is collected, she will be able to fire an explosive round back at her rival. Any beam weapon can complete the task of absorbing Dark Samus' spent Phazon, so long as Samus charges her Arm Cannon.

Dark Samus herself wields a unique Phazon-based beam weapon in her Arm Cannon known as the Shrapnel Beam. It fires sharp pieces of Phazon that embed themselves into the surfaces they impact on. It has a high firing rate and multiple projectiles fly out simultaneously in a spread-shot manner, covering a wide area. She is also able to fire both a thin and a massive beam comprised of Phazon in the game, though these have never been named.

This beam weapon shares a great many similarities with the chaotic Phazon Beam from the first Metroid Prime game, albeit in a more controlled fashion and streamlined look. It can thus be viewed as a refined successor.

Once Samus attains the PED Suit, she gains the ability to enter Hypermode at will, using the Phazon implanted in her by Dark Samus to power it. This variant of the Phazon Beam is called the Hyper Beam. Unlike this weapon's predecessor, once she enters Hypermode, Samus can fire single blasts of Phazon energy or charge it up. The charged version of this has Samus shooting out a rapid-fire stream of Phazon energy, dealing significant damage to nearly any enemy and using 4 units of energy per shot. As the charged shot is firing, the tip of the Arm Cannon spins, and the whole action looks similar to a gatling gun firing.

Despite its refinements, it remains the only Phazon-based beam weapon that harms Samus' by draining her health with each use. Additionally, it can cause further harm with the occasionally random corruption of her suit.

Dark Samus continues to use her Shrapnel Beam, along with a new and extensive arsenal of other Phazon beam weapons.

"When Samus' Power Suit is corrupted by viral contamination, the Arm Cannon becomes capable of firing the powerful Phazon Beam. The Phazon Beam is only triggered in the presence of high concentrations of Phazon. The Phazon Beam has a devastating effect on its targets. The Charge Beam does not function when the Phazon Beam is active, but even the uncharged blast is fierce enough to make quick work of most foes."

The viral corruption of the Power Suit has altered the Arm Cannon as well. It is now capable of firing the powerful Phazon Beam.

The Phazon Beam appears to trigger in the presence of high concentrations of Phazon.
Regular Arm Cannon functions return when Phazon is not present.
The Charge Beam does not function when the Phazon Beam is active.

The Phazon Beam in Metroid Prime can be acquired outside of normal means via hacking. Based on its coding, it is believed to possibly play a much larger role in the game, as it has unique features associated with it:

Samus about to fire the Phazon Beam at Metroid Prime.

The Phazon Beam is used in the Phendrana Drifts, via hacking. 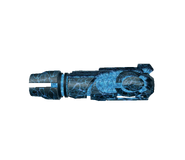