The Phazon Core is a room in the Impact Crater. It appears in Metroid Prime.

In the original NTSC version of Prime, this is the only room where Fission Metroids are encountered. However, in the PAL, New Play Control! and Metroid Prime Trilogy versions of Metroid Prime, weaker variants are also encountered in the Phazon Mines' third floor after defeating the Omega Pirate. They spawn endlessly from the pool of Red Phazon at the bottom of the cavern. The room contains a lot of floating platforms and ridges in the middle pillar, irregular teeth-like structures on the walls (called tooth rocks in the game's concept art), and intertwined ore-like structures that serve as bridges. A large bone-like pillar is also situated in the middle.

Interestingly, the room's name suggests this is where the Phazon Core would be found, yet it can not be seen. Some theories suggest that the Metroid Prime absorbed it. This is supported by the fact that Metroid Prime itself can generate Phazon (normally an ability exclusive to the Core) and it is suspended where the core would normally be when first seen (albeit in a different room), as well as the destruction of the Impact Crater following the defeat of Metroid Prime (just as how Leviathans explode after their respective Phazon Cores are killed).

It is also worth noting that tubes can be seen coming from this room's ceiling, going through Crater Tunnel B, before finally spiraling upwards to the top of the Phazon Infusion Chamber (with wires from the ceiling then infusing Metroid Prime with Phazon). This could lend credence to the theory that the Phazon Core is, or was located in this room. This is also supported by Pirate Data, which says that Metroid Prime is absorbing massive amounts of Phazon from the Phazon Core at the heart of the crater.

Samus targets a purple Fission Metroid at the base of the room. 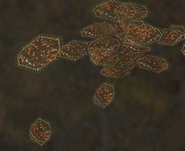 Closeup of the protozoans swimming around.

A Fission Metroid being spawned.

A purple Fission Metroid stuck inside a wall.