The Phazon Enhancement Device is based on captured Space Pirate technology. Used to gain power from Phazon corruption, it was being tested by a GF Marine battalion stationed in the Norion System. At some point the Space Pirates developed a version of the system and applied it to a large number of their troops. Marines can initiate an energy siphon from the supply of Phazon carried in a backpack into their armor suits. This allows them to temporarily enhance the exoskeleton and weapons systems of their armor suits. To date, no Marines have displayed signs of Phazon Sickness, common in subjects who use the Space Pirate's version of the system. The P.E.D. is represented by a silver plate with the G.F. logo and some markings on it which attaches to the owner's armor (or, in Gandrayda's case, to a necklace-like object).

Despite the video footage describing the advantages of the P.E.D. and its superiority over the Pirates' version of the device (narrated by Aurora Unit 242), a P.E.D. Marine is seen with his arm twitching and shaking erratically, but is quickly brushed off and the marine quickly catches up with his military companions; this subtle loss of control is most likely related to Phazon Sickness.[1]

In Metroid Prime 3: Corruption, Samus Aran and three other bounty hunters, named Rundas, Ghor, and Gandrayda receive Phazon Enhancement Devices, or PED Suits, after being corrupted by Dark Samus' attack on Norion. Unlike those used by the G.F. Troopers, these units do not require an external supply of Phazon, since the hunters now produce it from their own bodies. The P.E.D. Suit allows Samus to enter Hypermode, but at the cost of one full Energy Tank. In Hypermode, Samus' attacks become more powerful and use up Phazon. If Samus depletes her Phazon reserves, Hypermode ends. Hypermode also ends automatically after twenty-five seconds. Hypermode can also be exited automatically at the player's decision and the remaining Phazon is converted back to health, unless corruption has begun. After ten seconds, the Phazon level will start rising on its own, and if it fills the meter, Samus dies; completely corrupted by Phazon. Expelling the remaining Phazon to end Hypermode is a safe way to avoid death by corruption. On Phaaze, Samus presses a button on the P.E.D. which initiates an 'Emergency Vent' to keep her Phazon levels under control by venting all her spare Energy Tanks. This leaves Samus in permanent Hypermode, with her Phazon level steadily rising from all the Phazon in the atmosphere.

Samus is able to delay her corruption long enough to complete her mission, but the other bounty hunters who had suffered under Dark Samus' attack turned rogue at an undetermined time and attacked Samus, leading to boss fights with all three hunters. After Dark Samus' defeat and the destruction of Phaaze, Samus' Phazon Enhancement Device becomes useless, as she no longer has the Phazon that Dark Samus corrupted her with.

"Phazon Enhancement Device - GF DF PX013"
"The Phazon Enhancement Device is based on captured Space Pirate technology. It is being tested by a GF Marine battalion based in the Norion system. Marines can initiate an energy siphon from the supplied Phazon carried in a backpack into their armorsuits. This allows them to temporarily enhance the exoskeletal and weapon systems of their armorsuits. To date, no Marines have displayed signs of Phazon Sickness, common in subjects who use the Space Pirate's version of the system." 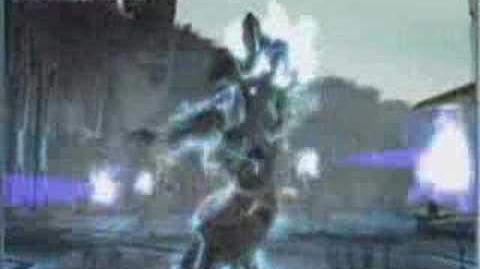 A rear view of a Galactic Federation Trooper using the PED. 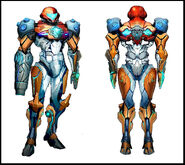