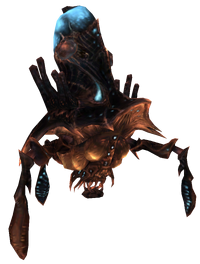 Phazon Harvester Drones were created by the Space Pirates exclusively for collecting Phazon. They originated as Goliath-class heavy assault drones and were later converted by the Pirates. They are heavily armored; their anti-air weapon system is vulnerable to an overload, but hitting that area with weapons fire would only stun it. Samus Aran's Gunship can destroy it, but only after the planet's defense system generator is shut down. Killing the Harvester Drone earns Samus a Friend Voucher, "Harvester Destroyed". This drone is extremely durable and can be a nuisance to Samus, as it fires at the bridges she uses to get through Phazon Harvesting. 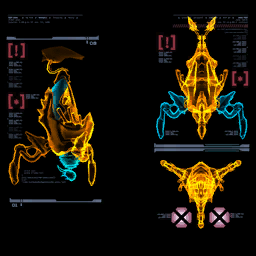 Mechanoid: Phazon Harvester Drone
Anti-air system cannot be destroyed, but overloading it will stun the drone.

Man-portable weaponry cannot penetrate the thick hull of the Phazon Harvester. The anti-air weapon system is vulnerable but overloading it with weapon fire will only disable the drone temporarily. The pirates converted several Goliath-class heavy assault drones into Phazon-collecting units. The drone can use its Harvesting Beam Cannon for defense, and is equipped with an anti-aircraft missile defense system.

A rip of the model.

The drone is destroyed.
Deutsch
Community content is available under CC-BY-SA unless otherwise noted.
Advertisement