Phazon Nightbarbs are Nightbarbs mutated from contact with Phazon. Due to their Phazon mutations, their speed has been increased to the point where it is impossible to get a direct hit on them with any weapon. They have also gained the ability to group together to fire large energy bursts at enemies. The energy is unstable and volatile, and any contact with a different bioform or other forms of energy can make it detonate. To make the energy bursts, they must sacrifice some of their own energy. Samus must shoot the energy when it becomes large enough in order to overload it and destroy all the Nightbarbs in the group at once. Phazon Nightbarbs are only found on Bryyo. The Nightbarbs' attacks produce the following effects:

These attacks are similar to those of a Swarmbot.

Rooms that contain Phazon Nightbarbs include the Gateway and Crash Site. 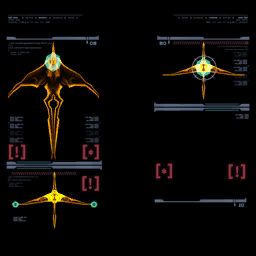 Morphology: Phazon Nightbarb
Group forms powerful attack, but it can be overloaded to destroy them.

Phazon Nightbarbs have enhanced aerial mobility that makes them all but impossible to hit with normal shots. The group will work together to create a powerful energy burst that they will fire at their prey. Detonating the energy charge with normal attacks before it fires should destroy them. Phazon Nightbarbs are the results of Nightbarbs being exposed to Phazon radiation. These mutations look similar to their uncorrupted counterparts, but are characterized by their greatly increased offensive and defensive capabilities. 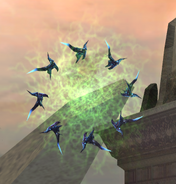