Wikitroid
Register
Don't have an account?
Sign In
Advertisement
in: Featured articles, Articles with non-canonical information, Suits,
and 7 more
English

The Phazon Suit (フェイゾンスーツ Feizon Sūtsu) is an upgrade to Samus Aran's Power Suit acquired in Metroid Prime and the game's final upgrade. While other suit upgrades involve the incorporation of advanced technological hardware, the Phazon Suit was the inadvertent result of the Power Suit being virally corrupted by Phazon upon defeating the Omega Pirate.

It would later serve as the foundation for Dark Samus' body in the main games of the Metroid Prime series.

The most distinguishing feature of the Phazon Suit was its uniquely dark color scheme: The armor covering the arms, legs and shoulders was entirely glossy black, while the helmet, torso and inner thighs were a dark silver-grey. Its visor was a bright orange, while the lights on the suit were crimson. Strangely, the Phazon Suit also emitted a slight aura that distorted the air around it, most likely due to radiation or the strength of its defensive shielding.

The Phazon Suit provided 50% damage reduction, the greatest level of defensive shielding in Metroid Prime. It also made Samus immune to radiation from blue Phazon, but offered no protection from the more lethal red Phazon strain. Finally, the suit could channel pure Phazon into itself and enter a state called Hyper-mode, which not only covered Samus' entire body with a blue aura, but also caused the emergence of blue veins on her right shoulder and radically transformed her Arm Cannon to fire the most powerful weapon in the game: the Phazon Beam.

After Samus Aran defeated the Omega Pirate, the latter collapsed on top of her and began to break apart, bathing her in the bubbling Phazon that poured from the cracks emerging on its body. The corpse glowed brighter and brighter until it eventually exploded, revealing Samus in the Phazon Suit. She seemingly suffered no ill effects from this viral corruption or from the new suit itself; in fact it protected her from blue Phazon for the remainder of her mission on Tallon IV, and it was only through the power of the suit's Phazon Beam (which did no harm to her either) that she defeated the Metroid Prime in the Impact Crater.

The Phazon Suit was lost when the defeated Metroid Prime pulled it from Samus with a tentacle, causing her armor to revert back to the Gravity Suit. In the aftermath of the Impact Crater’s destruction, Metroid Prime used the stolen Phazon Suit and Samus' DNA within to form a new body, reincarnating into Dark Samus. When its left arm emerged from the puddle of Phazon, it appeared to have the Phazon Suit’s red-and-black color scheme, with an eye on the back of the hand instead of the orange light that was present on Samus'. Interestingly, rather than wearing the Phazon Suit as an artificial armor, Dark Samus converted it into a partially organic body.

The Phazon Suit is worn by Dark Samus throughout the two main sequels. When it was stolen from Samus by the Metroid Prime organism, the armor seemingly carried remnants of data from her base Power Suit which granted Dark Samus access to many Chozo Powerups. These, however, were altered and energized by the doppelganger's internal Phazon. The Phazon Suit itself undergoes several extensive alterations since Dark Samus' birth in the Impact Crater.

In Metroid Prime 2, the suit's initial colors seen in the prequel were switched to a black and dark blue scheme, and the once sleek and technological look was modified to a rugged, organic design with glowing blue Phazon veins and markings. Its Morph Ball form's most notable feature is the ocular organ on each side. The suit is briefly referenced in Dark Samus' first logbook entry where it is described as "a version of the Varia Suit". It received another physical alteration during the final battle in Metroid Prime 2 where the suit became entirely translucent, revealing its wearer's internal organs.

The suit's visual appearance changed for the last time in Metroid Prime 3, where it returned to a technologically armored aesthetic while being more streamlined than the original Phazon Suit worn by Samus. It was eventually destroyed when Samus killed her doppelganger for good.

In Metroid Prime 3, the Galactic Federation merged their "Phazon Enhancement Device" with Samus' Varia Suit, creating the PED Suit. This granted her benefits akin to the Phazon Suit's, such as resistance to the mutagen's radiation and being able to trigger a powerful state that gave access to a Phazon-based weapon (called the Hyper Beam), therefore making the PED Suit a successor of sorts.

However, it soon became clear that it was inferior, as the PED could easily endanger Samus' life if not kept in check. This is due to its inability to harness Phazon in as safe and reliable of a manner as its predecessor. If Samus entered Hypermode and did not empty the Phazon gauge in time, she would succumb to Terminal Corruption, thus transforming her into another Dark Samus. Additionally, the Hyper Beam was arguably weaker in raw power than the Phazon Beam, though it made up for it by not requiring pools of Phazon in the environment to be used.

The Power Suit has been corrupted by viral exposure, turning it into the Phazon Suit.

"Phazon, the highly radioactive substance found on Tallon IV, can cause damage to normal suit systems. But if you discover the Phazon Suit, you will be able to safely enter Phazon-infected areas."

In the original Nintendo GameCube version, the acquisition cutscene showed Samus assuming a pose where she aimed her Arm Cannon to the right. This scene was altered with the release of the Japanese version, as she simply stands normally before clenching her fist.

An early design of the Phazon Suit is present in the game's files (images below). Sneath, a Senior Artist at Retro during Metroid Prime's development, revealed the following when asked about this design:

In the concept artwork for the Phazon Suit, featured in the infobox at the top of this page, Samus's eyes are visible through her visor via a reflection on her left shoulder.

The Phazon Suit appeared in the final issue of the comic book adaptation of Metroid Prime by Dark Horse Comics and issued by Nintendo Power. It largely had the same role as in the game, although Samus in her monologue indicated she merely "found" the suit while exploring Tallon IV instead of involuntarily receiving it from the Omega Pirate falling on her. The ending also has Samus claiming that she lost the suit as a consequence of her expelling excess Phazon onto Metroid Prime's core essence, unlike in the game where the creature stole the suit as it's last action before it overloaded upon being defeated.

The Phazon Suit appears as an Ace class Support Spirit. When equipped alongside a Primary Spirit with at least two available support slots, it grants its user Poison Immunity, referencing the Phazon Suit's ability to nullify damage from Phazon. Unlike most Spirits, the Phazon Suit cannot be acquired through Spirit Battles; instead, it must be purchased from Sheldon's Place in the World of Light.

Additionally, the Phazon Suit is mentioned by Palutena while discussing Dark Samus's origins in Palutena's Guidance. Viridi replies that Dark Samus must be strong due to being a Metroid combined with one of Samus's suits.

The Phazon Suit is born.

The Phazon Suit in the Metroid Prime comic.

The Phazon Suit with the Fusion Suit turned on, using the color scheme of the "Omega Suit". 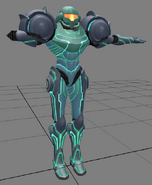 An early version of the Phazon Suit with a different color scheme. 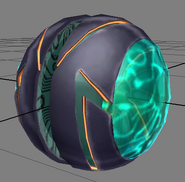 The glitched appearance of the Phazon Suit if full inventory hacks are used at the start of the Frigate Orpheon in Metroid Prime. Interestingly resembles the Beta Phazon suit.

The beta Phazon Suit color scheme is present in this artwork.

The Phazon Suit appears as a variant of the Varia Suit in Miitomo.