A Phrygisian-Class gunship was the personal craft of the Bounty Hunter Rundas. Its last known use was during Rundas' mission to Bryyo, which ended in him succumbing to Dark Samus' corruptive influence and breaking contact with the Galactic Federation, his employers. The parked ship was later discovered by Rundas'comrade, Samus Aran, when she arrived at the Fiery Airdock in Bryyo Fire; while the hunter himself was nowhere to be seen, the ship's warm engines indicated that it had not been there for long. Following the death of its owner, the Phrygisian-Class Gunship was left behind at this site; its ultimate fate remains unknown.

The Phrygisian-class gunship appears to have three rotary engines, what seems to be two semi-triangular pieces of landing gear that may also be used for the ship's weapons storage (if it doesn't just use Rundas' weapon). Much of the ship's hull looks like Rundas' torso, similarly to Samus Aran's Gunship looking like her helmet. It is currently unknown whether or not the pilot sits or lies down inside of the ship. 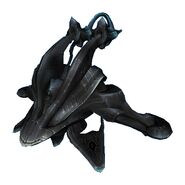 Render
Add a photo to this gallery
Retrieved from "https://metroid.fandom.com/wiki/Phrygisian-Class_Gunship?oldid=274755"
Community content is available under CC-BY-SA unless otherwise noted.