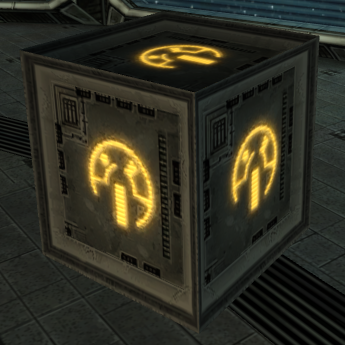 Pickup Crates are a box exclusive to the Metroid Prime 2: Echoes multiplayer mode. As their name implies, they are crates scattered around every stage that hold any one of the game's three beams, or the Power Bombs. Said pickups are retained unless the carrier is defeated.

The Pickup Crate resembles a black box with a yellow emblem on it, as depicted ingame. However, in the manual, the yellow emblem is replaced with a red heart-shaped symbol that makes it visually resemble a flammable container seen only in Metroid Prime.

Retrieved from "https://metroid.fandom.com/wiki/Pickup_Crate?oldid=197782"
Community content is available under CC-BY-SA unless otherwise noted.