Aerotroopers would be assigned the most dangerous missions, and would rather die than be captured. They used jetpacks, and could be set on fire using the Light Beam in Echoes. Later on in Corruption, a combination of a charged Plasma Beam shot and the use of the Grapple Lasso could separate an Aerotrooper from their jetpack, sending them to the ground. The explosion of the jetpack would kill them if they did not fall to their doom.

When critically injured, Aerotroopers would attempt a swirling suicide attack on their opponent, hoping to take their attacker with them to the grave. The Dark Beam, Ice Missiles and Phazon-based weaponry could prevent the Aerotrooper from executing this maneuver.

Pirates of a similar nature appeared in Metroid Prime, but these were much different in design and were called Flying Pirates.

The Aerotroopers seen in Metroid Prime 2: Echoes are scarce, but well-armed and armored. They are equipped with modified green Galvanic Accelerator Cannons, swirling homing Missiles and as a final resort can use their suicide techniques. However, they can be shot down with three missiles from Samus (six on Hard Difficulty). A Super Missile will take down a Pirate Aerotrooper on Hard mode, spares the use of an extra Missile, and will prevent kamikaze attacks by detonating the jet pack. They have a large, bulky structure protruding from the left side, which serves as the jetpack. This device produces a lot of smoke, and sparks can be seen from the thrusters. Overall their appearance is crude, and their armor looks large and inelegent. They have long, beak-like heads, and two blue glowing eyes.

The animations, attacks and sounds of the Aerotroopers were recycled from the Flying Pirates of Prime.

Pirate Aerotroopers are known for their cold precision and utter cruelty. Armed with both beam and missile systems, the Aerotrooper can be a difficult foe to engage, especially at range. Their jet packs can be overloaded with heat-based attacks, however. These units prefer death before dishonor: an injured Aerotrooper will make a suicide attempt strike before allowing himself to be captured.

There is an unused Logbook entry for a Dark Pirate Aerotrooper, which may have been scrapped as an enemy for being too similar to the light version.[1]

The vicious Aerotroopers are easily possessed by darklings, who feed off of their cruel natures.
Dark Aerotroopers relish their speed and power, often losing themselves in the thrill of the hunt.
The added strength gained from possession makes them more confident and aggressive in battle, making an already difficult opponent that much harder to vanquish.

A Pirate Aerotrooper frozen with the Entangler.
Add a photo to this gallery

The Metroid Prime 3: Corruption variations of Aerotroopers use a Remote Attack Pod system rather than the bulky pack-mounted weapon system seen on Aether. The pods make use of Particle Cannons and Helix Missiles/Gel Bombs. The system allows for a greater maneuverability, and can break a target lock from Samus. The disadvantage to this lighter system is the weaker armoring, and a flaw: If the pack is ignited, it can be separated from the flier. If this happens, the Aerotrooper will either get killed when the jetpack explodes, or fall to the ground and die. The first time Samus does this, she will get a Friend Voucher. The technique can be repeated with any Aerotrooper, but Samus will not get any more Friend Vouchers from this technique after she has used it once already. 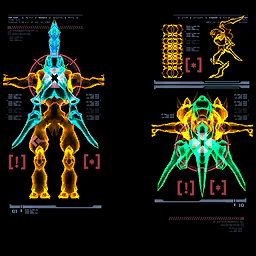 Aerotroopers are dangerous foes, but their lack of armor leaves them vulnerable to explosive blasts. A weakness also lies in the jet pack: igniting it will allow the pack to be separated from the pilot. They use twin Remote Attack Pods to engage targets. The Attack Pods are capable of using a Particle Cannon or a Helix Missile Pod. They can tap their Phazon power unit to warp from point to point.

Armored Aerotroopers are deployed in harsh combat zones. Their armor is resilient, but susceptible to explosive blasts. In battle they use twin Remote Attack Pods to engage targets. They are equipped with a Particle Cannon and a Helix Missile Pod. They can tap their Phazon power unit to warp from point to point. A weakness lies in the jet pack: ignite and separate it from the pilot to neutralize the target.

When the going gets tough, the tough put on armor. Advanced Aerotroopers wear an extra layer of ablative armor that is susceptible to explosive blasts. Like regular Aerotroopers, they wield two Remote Attack Pods in combat. These are outfitted with a Particle Cannon and a Gel Bomb Rack. Gel Bombs stick to their targets until detonation. High-velocity movement can remove Gel Bombs.

Only the best can join the ranks of the Assault Aerotroopers. Heavily armored, they are resistant to most weapon systems. Their unique armor is able to deflect all Missile attacks, but can still be damaged by Beam weapons. Like regular Aerotroopers, they wield two Remote Attack Pods in combat. One is equipped with a Particle Cannon, the other with a Gel Bomb Rack. Gel Bombs stick to their targets until detonation. High-velocity movement can remove Gel Bombs. 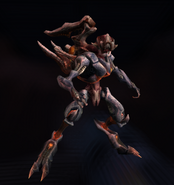 Gandrayda as an Armored "Aerotrooper-G" at the Proving Grounds.
Add a photo to this gallery

Retrieved from "https://metroid.fandom.com/wiki/Pirate_Aerotrooper?oldid=272366"
Community content is available under CC-BY-SA unless otherwise noted.