Most likely toxic, due to the constant fall of acid rain and pollution.

Constant acid rainfall, Leviathan impact.
The Pirate Homeworld is a planet visited by Samus Aran in Metroid Prime 3: Corruption. Originally thought to be the birthplace of all of the existing Space Pirates, the Metroid Prime Trilogy art booklet stated that it is merely "one of the Space Pirate homeworlds."

Though the planet is effectively unnamed in the other versions of Corruption, the Japanese version, the Spanish version and unused text suggest that the planet is named Urtraghus by the Space Pirates and Planet SN-883 by the Galactic Federation.

Unofficial Map of the Pirate Homeworld: [1]

The Pirate Homeworld is plagued by a steady stream of Acid Rain, harming any creature without protection in the form of a Hazard Shield. It is unique as it features a transit system, connecting areas for convenience to travelers on foot. The planet was the first target chosen by Dark Samus to impact a Leviathan onto after taking control of Phaaze with Aurora Unit 313. Space Pirate Data insinuates this occurred long before Bryyo and Elysia were impacted. Phazon corruption seen on the Homeworld is more advanced than the other planets, containing many immense Phazon growths on it’s surface. The Space Pirates' willing interactions with the Seed are likely to have contributed to the corruption as well. The Homeworld was also protected by a gigantic shield which Samus had to deactivate in order for the Galactic Federation's assault to commence. When the Leviathan was destroyed, the planet's corruption was stopped.

The planet includes the Command Center, a Research Facility, a Mining Site and the Pirate Homeworld Seed. In the Command Courtyard, there are three doors in one room that could not be opened. It is likely that these doors led to the Pirates' living quarters. Various large tunnels are present too, possibly giving the Pirate Cargo Drones access to the rest of the base. Samus navigated these tunnels by using her Gunship, in which she could fly quickly and undetected.

While the planet's most abundant life-forms are Space Pirates, Phazon Metroids and a few other bioforms dwelled on the planet as well such as the Shriekbats and Scritters who thrived in the sheltered areas throughout the Space Pirate complexes despite the inhospitable weather conditions. A number of mechanical creatures also resided on the planet like the Puffer Mines which are cybernetically enhanced to survive the rough conditions.

A number of deceased wildlife can be found and scanned in various places where the Pirate experiments went wrong, such as in the Scrapvault where one example was woven into the room's structure.

The Bounty Hunter Gandrayda makes an appearance here in a boss battle. The Leviathan on the planet is guarded by Omega Ridley, an enhanced and revived version of Meta Ridley corrupted by Phazon.

Below is a full list of known inhabitants including the creatures, Pirates and mechanoids.

GFDF UT-009
Until recently, Urtraghus was listed as planet SN-883, an inconspicuous world far from the boundaries of Federation space. We now know that a large armed force of space pirates is stationed there. The pirates call this planet Urtraghus, meaning "Large Booty". First scans were blocked by sophisticated jamming technology. We are currently awaiting a report from GF agents who were deployed in this sector.

Entry 07.289.5
The fury of our leader is great. Many disciples have experienced her wrath since Urtraghus fell. However, despite our defeat, her confidence is unbroken. Soon the next phase of her campaign shall take effect against the Federation.
The Aurora has performed the last calculations. Our leader is ready to strike. Soon, Phaaze will sow a large number of Phazon Seeds. They will feel hundreds of Federation worlds. This blow may be the end of Phaaze, but our leader is without worry. For hundreds of live Phazon worlds will replace it.

Entry 07.004.8
The situation seems dire. The Federation and it’s rabid beast Aran have turned Urtraghus into a flaming field of debris. Our troops were driven out and there is no message from Mistress Gandrayda. We fear she shares the fate of her comrades... struck down by the hands of the hunter.
However, secure bliptrans transmissions reveal worse. The Federation has taken possession of the flagship of our leader. They have the Leviathan. With it’s power, they can open a wormhole at any point in space... even the origin of all Phazon. Our spies tell us that they are preparing for the invasion. And yet we will not fear, for the great leader is with us!

The different areas on the Pirate Homeworld, seen on the World Map.

One of the X-Ray Terminals that uses a code system.

Selecting the floor in the Lift Hub room.

The terminal that controls the operation of a Mining Drill.

One of the Blue Doors on the Homeworld.

One of the Orange Doors on the Homeworld.

One of the Green Doors on the Homeworld.

Landing Site Bravo, the pad for the Command Center.

Landing Site Alpha, the pad for the Pirate Research Facility.

Landing Site Charlie, the pad for the Pirate Mines.

Using the tower in the room Craneyard to reach the Hazard Shield.

The Pirate ventilation shaft which leads to the X-Ray Visor.

The Federation attacks the exposed Homeworld.

The room Metroid Processing in the Research Center.

The Warp Site that leads to the orbiting Leviathan battleship.

A full view of the Pirate Homeworld and it’s surrounding atmosphere.

The cityscape of the Pirate Homeworld. 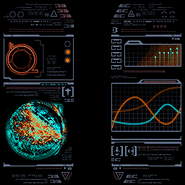 Scan images of the Pirate Homeworld from the Space Pirate Creatures section of the Logbook.