Deployed on Norion, Bryyo and Elysia

Pirate Militia are the lowest-ranking and most expendable of the Space Pirate forces in Metroid Prime 3: Corruption. They are mostly composed of criminals and slaves, yet they obey their superiors surprisingly well. This is attributed to a rumor that disobedient militia often end up as dinner for higher-ranking Pirates. The Pirate Cargo Drones seem to contain a Militia's head, which could be another cruel punishment among Pirates.

Pirate Militia hailing from the Pirate Homeworld share the same basic structure of their higher-ups: Their bodies are brown and eel-like, with four pairs of eyes, sharp-toothed mandibles and artificial limbs grafted on. However, as the lowliest in Pirate society, Militia are given very little; even their artificial limbs are literally bare-bones, consisting mostly of metal rods with little organic tissue. They are commonly starved by their higher-ups and desperate Militia have been known to eat vermin like Scritters, despite risking illness by ingesting the creatures' toxin. After their planet was corrupted, they lacked the Phazon enhancements that standard troopers bear, but seemed to have been corrupted anyway (possibly because of the Leviathan impacting their Homeworld).

Oddly, their scans state that they are not Phazon-enhanced, yet some are capable of entering Hypermode. However, this is somewhat plausible, as seen in the case of the PED Troopers, who do not have any actual Phazon enhancements to their bodies but instead use an external Phazon supply. This could also be true in the case of the Pirate Militia, though the source of this supply is not visible in their armor. Also, while the render of the Pirate Militia (in the gallery) does not contain a single trace of Phazon, their model during gameplay portrays them with Phazon-coated bodies (the same is also true of the officially released artwork of the Pirate Troopers).

Several types of Militia exist in Corruption. Despite having armor and shields, Militia are still very weak.

The standard Pirate Militia are given very little in terms of equipment: Their projectile weaponry is feeble compared to their Trooper brethren, and they have only retractable energy scythes for melee combat. They have no armor whatsoever, making them vulnerable to as little as a single charged Power Beam shot.

Shield Pirate Militia are Pirate Militia equipped with the Shield Pirate Trooper's energy shield. The shield protects the user from most small arms fire, but it can be ripped off using the Grapple Lasso or destroyed with Hypermode attacks. The Pirate's energy can also be drained using the Grapple Voltage. They also need to lower the shield to shoot their guns, so it is possible for Samus to avoid the attack and quickly shoot the Pirate while it is exposed, before it lifts the shield again.

The Armored Pirate Militia are Pirate Militia equipped with grey, beam-resistant armor although the armor is vulnerable to Missile attacks. Militia possess a lesser muscular bulk than that of the standard Pirate Trooper, so little that the standard Trooper armor looks too big for them. Although their armor is said to be beam-proof, in actuality it is only moderately effective against them and can actually be shattered with a few Charge Beam shots, which is useful when fighting them before the Missile Launcher has been obtained or if Samus is low on Missiles. 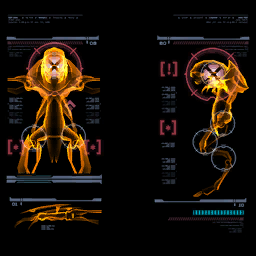 The pirates have not enhanced all of their fighting forces. They continue to use militia units in battle. These groups are made up of slaves and criminals, and do not receive the Phazon enhancements given to regular army troopers. They are surprising obedient to the upper castes within the pirate military. Rumor has it that disobedient militia members often find themselves as dinner for regular army troopers.

Some members of the Pirate Militia have been granted use of regular army-trooper equipment. This unit has been given the portable battle shield. Its portability is its weakness, however. Remove it from the pirate's grip to eliminate its primary defense system. The shield is also susceptible to Phazon-based attacks.

In the files of Corruption, four unused variants of Militia can be found, each with specialized armor identical to the variants of Pirate Troopers seen in the game. 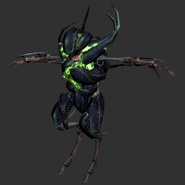 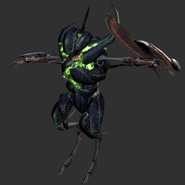 Assault Pirate Militia were to represent the best of the Pirate Militia. They would have been equipped with sloped, translucent orange, Missile-deflecting armor. Interestingly, their Logbook entry indicates that they would be instated into the official Space Pirate army if they proved themselves worthy. 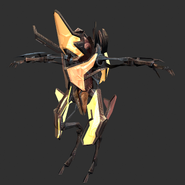 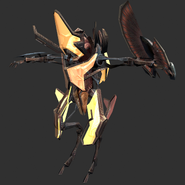 The pirates in this militia unit wear an additional layer of ablative armor. Despite the added protection, the armorsuit is still vulnerable to explosive blasts. Their portable battle shield, while resistant to most small-arms fire, is also easily pulled off. Phazon-based attacks can also destroy the shield.

The heavy armorsuits of the Assault Pirate Militia provide adequate resistance to most weapon systems. This unit is the most skilled of all the militia forces. If able to prove themselves in combat, the pirate military will grant them admittance into the official army ranks.

Members of this militia are well equipped. Their heavy armorsuit is resistant to most weapon systems, and their portable battle shield can withstand most small-arms fire. Their shields provide excellent protection, but are easily ripped from their arms. Phazon-based attacks can easily destroy the shield.

(left to right) A Militia with an Armored Militia in the G.F.S. Olympus.