This article is about standard Space Pirates. For other uses, see Trooper (Disambiguation).

Cannon and scythe
Pirate Troopers are a standard variety of Space Pirate in the Metroid Prime series.

While there were no Space Pirate classes named "Pirate Troopers" (not to be confused with Trooper Pirates) in Metroid Prime, the direct predecessor to Pirate Troopers is simply known as a Space Pirate. Much like their Pirate Trooper successors, these Space Pirates are the standard enemies and are armed with Galvanic Accelerator Cannons and Scythes.

During the events of Metroid Prime 2: Echoes, Pirate Troopers' arsenals include a photonic power scythe and quantum assault cannon, which at the time were standard-issue weapons for their rank. Most troopers were stationed at their base in Agon Wastes, which was constantly targeted by shadowy creatures, who took a liking to the pirates' technology and moved to take every trooper they could.

The Pirate Troopers in Echoes are unique in that they have the capacity to teleport, an ability which they use to suddenly enter an area and attack Samus, though strangely they don't use during battle. In every other game this ability is reserved for high-ranking Pirates, such as Pirate Commanders.

Pirate Troopers appear in other areas around Aether besides Agon, but aren't very common and rarely respawn. A Pirate Trooper has 60 energy points. (On Hypermode, Trilogy version)

During the events of Metroid Prime 3: Corruption, Pirate Troopers got a major overhaul, using a new Phazon enhancement system. Their Phazon-powered weapons include an assault rifle and deployable energy scythe, along with EMP grenades for power-armored foes and a new Dash Jet system for increased mobility.

Corruption's basic Pirate Troopers mostly appeared on Bryyo, but they are seen every time the armor of an upgraded Trooper is broken off, implying that the Troopers from Echoes were armored too. They also appeared alongside Militia and Aerotrooper Units on Norion, and also frequently on the Pirate Homeworld.

In comparison to previous incarnations, the Troopers in this game seemed slightly less agile and were not seen capable of clinging to walls either. They could still jump over great distances however.

Several types of Troopers exist in Echoes and Corruption. In Corruption, all of these varieties appear as Aerotroopers as well (excluding shield varieties).

Pirate Grenadiers are Pirate Troopers armed with an experimental grenade launcher. The size of the launchers prevent Grenadiers carrying the scythes or beam weapons wielded by other Pirates; the launcher is also ineffective against nearby opponents. At close range, the Grenadiers will resort to ramming. Due to the time it takes to charge the launcher, Samus can easily get out of the grenades' blast radius. Samus first encounters the Grenadiers in the Space Pirate base in Agon after the first battle with Dark Samus. They also appear in the Temple Grounds on the way to Torvus Bog, but they do not respawn on subsequent visits. Along with the Pirate Aerotroopers, Pirate Grenadiers are the only Space Pirate varieties in Echoes that were not possessed by the Ing.

Dark Pirate Troopers are Darklings, Ing-possessed Pirate Troopers. They are a useful addition to the Ing Horde, as those who are trained to follow orders without question are easier possession targets. They're often placed in locations important to the Ing, such as Dark Portals. Ing also tend to target Pirate Commandos for possession, a unit which they greatly prize.

In Corruption, all variations of Pirate Troopers have a sub-variant Shield Trooper. A Shield Trooper carries a portable battle shield that can either be removed with the Grapple Lasso or destroyed with Phazon attacks, except on Hypermode difficulty, provided the enemy has engaged Hypermode. The Grapple Voltage can also drain or overload energy from or into a Shield Trooper. However this can not be done in one go, as the Pirate will occasionally break free of the lasso.

Armored Pirate Troopers are equipped with a standard armorsuit that provides adequate protection against beam weapons, but can be breached with missiles. These units greatly resemble the Pirate Troopers found in Echoes. While their heart-like feature in Echoes was a deep red, the one in this game is a light blue, to represent the Phazon corruption all the troopers bear. 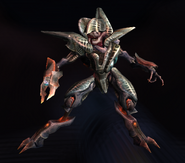 Advanced Pirate Troopers are Pirate Troopers which have been outfitted with a green-colored ablative armor. The armor is weak against Missile blasts, but resistant to beam attacks. They are essentially stronger versions of Armored Pirate Troopers. Advanced Troopers also have a Dash Jet system, like many of the Pirate armor systems. Their weapon systems include assault rifles, energy scythes, and EMP grenades. These are the rarest troopers in the game, but are seen mostly during the Galactic Federation's assault on the Skyway to the Leviathan. 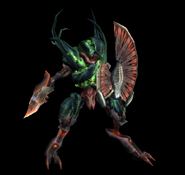 Assault Pirate Troopers represent the best of the Pirate Troopers in the Space Pirate military. They are equipped with sloped, translucent orange, Missile-deflecting armor. A Dash Jet system is also built into the armor. Basic armament includes assault rifles, energy scythes, and EMP grenades, all powered by Phazon. However beams can damage their armor. 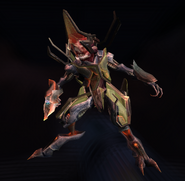 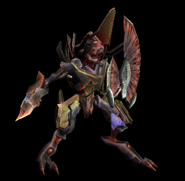 The Space Pirates suffered a serious defeat at Tallon IV, yet they remain a powerful force for crime and disorder in the galaxy. Their technology continues to advance: even the lowly trooper has received numerous upgrades to his arsenal. A photonic power scythe and quantum assault cannon are now standard-issue weapons for all troopers. 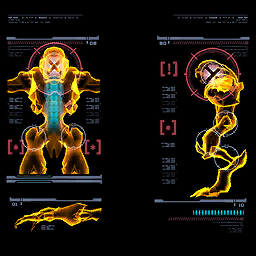 The Space Pirates have developed a man-portable battle shield that is resistant to most small-arms fire. Its portability is its weakness, however. Remove it from the pirate's grip to eliminate its primary defense system. Phazon-based attacks are capable of destroying the shield.

Armored Pirate Troopers are equipped with a standard armorsuit. It provides adequate protection against Beam attacks but is vulnerable to explosive blasts. They are outfitted with all the basic pirate armaments. This includes the assault rifle and energy scythe, both powered by Phazon. EMP grenades are often employed against power-armored foes. A new Dash Jet system provides increased mobility.

Armored Shield Troopers are equipped with a standard armorsuit. It is resilient, but still vulnerable to explosive attacks. In addition to their armor, they wear a portable battle shield. Removing the shield leaves them open to all attacks. The shield is also vulnerable to Phazon-based attacks.

Advanced Shield Troopers wear an extra layer of ablative armor: it is susceptible to explosive attacks. In addition to their armor, they wield a portable battle shield. While the shield provides excellent protecting against incoming fire, it can also be easily ripped off. Phazon-based attacks are capable of destroying the shield.

The Assault Pirate Troopers are some of the best the pirate military has to offer. They are heavily armored and are resistant to most attacks. Their unique armor will deflect all Missile fire, but is still damaged by Beam attacks. Basic armament includes an assault rifle and energy scythe, both powered by Phazon. EMP grenades are often employed against power-armored foes. A new Dash Jet system provides increased mobility.

Assault Shield Troopers are heavily armored and resistant to most weapon systems. Their unique armor will deflect Missile attacks, but not Beam fire. In addition to their armor, they wield a portable battle shield. Their battle shield provides protection against all standard weapon fire, but can be easily torn off. Phazon-based weapons are capable of destroying the shield.

A Pirate Trooper with the ability to turn invisible ambushes Samus in an early trailer for Echoes. 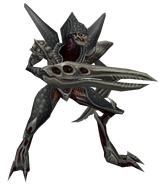 A Pirate Trooper model from Echoes. 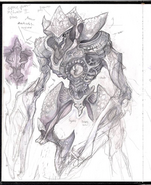 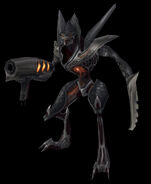 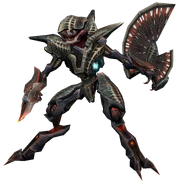 Samus rips the shield off a Trooper in an early version of Corruption.

A Pirate Trooper and two Armored Troopers, on the G.F.S. Olympus before stealing an Energy Cell. In the final version of the game, the Troopers were replaced by Pirate Militia.

The Nova Beam used on an Armored Trooper on the Skyway.

Samus grapples an Armored Shield Trooper on the Skyway. 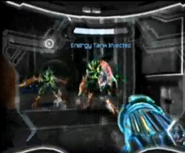 Samus aiming at a pair of Advanced Troopers on the Skyway. 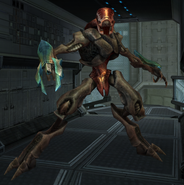 A Pirate Trooper, as seen in the 2006 prototype of Corruption. The coloration of their weaponry is notably a bright blue, and their bodies are tinted brown rather than gray. 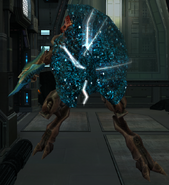 A Shield Pirate Trooper, also from the 2006 prototype. The shield's bright blue color may have been an early implementation of the yellow highlights that appear on objects vulnerable to the Grapple Beam in the final game.

An Armored Pirate Trooper from the 2006 Prototype. Though the armor is a vibrant blue color, the exposed "heart" is still red as in the final game.

A piece of concept art, used in-game as the texture file for Pirate Troopers that have exploded into chunks.
Русский
Community content is available under CC-BY-SA unless otherwise noted.
Advertisement