This stage is essentially a redesign of the Planet Zebes stage from Super Smash Bros. Acid constantly surges up and down (similar to Lava Tides) from the core, dealing damage, but when the acid level is high it serves as a "cushion" that prevents you from being knocked out by falling off of the main platform.

Two of the three floating platforms are held up by fleshy stalks; these can be destroyed by repeatedly hitting them, causing the platforms to tilt at an angle. Additionally, if players attack the part of the floor composed of reddish bubbles (resembling those found in Norfair), it will split the main platform into two parts, making it harder for players to fight. Any damage done to the stage will gradually be regenerated.

The Torizo from Super Metroid can be seen standing up and walking around in the background. Near the Torizo are bricks with angry faces, based upon those found in the blue-rock areas of Brinstar in Metroid.

There is an alien organism attached to the ceiling in the far background of the stage that resembles a brain with a wiggling tentacle, or "tail", which is actually a spinal cord. It is a common misconception that this organism is Mother Brain, but it lacks several of the Space Pirate leader's characteristic features, such as the single eye, spikes protruding from the brain and wrinkles.

The stage is available from the start in all of its appearances. The player fights Samus and/or Zero Suit Samus in most game modes. In Melee's Adventure Mode, after fighting Samus, the player must evacuate Zebes in one minute and traverse a tall escape shaft.

In Melee, Brinstar Depths (Melee) may randomly play on this stage instead of Brinstar (Melee) during Adventure Mode. In Brawl and 3DS, it can be played on this stage during other game modes.

In Ultimate, any song from the Metroid series can be played on this stage. By default, Brinstar (Melee) is the most frequently played song, and Title Theme - Metroid is the second-most frequent song.

"Inspired by: Metroid
This stage contains a cluster of platforms suspended within a cavern. Over the course of a battle, the cavern occasionally fills with acid, rendering any submerged platforms unusable. Any fighters who touch the acid will be launched into the air with a damaging attack, so move as needed to keep clear of this environmental hazard. There’s a weak spot near the center of the lowest platform - destroying this spot will temporarily split the platform in half.

The platforms tremble each time the acid level rises or lowers. At its highest point, the acid covers the three lower platforms, leaving a single platform as the only safe perch."

"This stage is an underground cavern on Planet Zebes, where the Metroid Series takes place. Although the rising and falling acid at the bottom of the stage can deal severe damage, touching it when you're falling off the stage can actually help you recover!"

Link and the Ice Climbers fight on Brinstar in Melee.

A battle on Brinstar in Brawl.

A closeup of the brain-like creature. 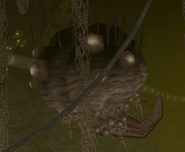 The brain-like creature wiggling its "tail", with its pustules extended.

The tunnel extending into the background.

Brinstar submerged in acid in Ultimate

Retrieved from "https://metroid.fandom.com/wiki/Planet_Zebes:_Brinstar?oldid=281917"
Community content is available under CC-BY-SA unless otherwise noted.