It returns in Super Smash Bros. Ultimate for the first time in seventeen years. As with the other returning stages, Brinstar Depths has been updated with high quality textures and more detail.

The stage itself is a large roughly circular platform floating in the air over a huge pool of lava. The default position is fairly level, with a slight rise to the right and two slippery-topped pipe structures. A small platform floats above the left part. Below the rightmost pipe another small platform floats, and the underside of the stage consists of large stair steps, a rounded slope, and blocks resembling Koma. A "Brinstar Brain" is embedded in the center platform, encased by thorny vines in Melee. Various decorations from the Metroid games festoon the center of the stage.

Several seconds after the fight starts, smoke and bursts of lava become visible, and Kraid rises up from the magma on either the left, center or right of the stage. He then does one of three animations (faces the camera and growls while lowering his head a little; lifts his head and rolls it back to a forward position while growling; and lifting his arms and rearing his head back and roaring, followed by snapping twice at the stage). He will then either rear back with his left arm raised while facing the stage and hitting the stage, slowly rotating it 60-90 degrees counterclockwise (he does this if he is on the right side of the screen), or he raises his right arm and throws his head back grandly, then swipes the stage sending it rotating clockwise (he does this if he is on the left side of the stage). If he is in the center, he will do either randomly. Kraid will then sink back into the lava, then rise again several seconds later to repeat the process, each time spinning the stage randomly left or right.

Kraid's attacks will not hit the players or items on the stage. However, the rotations will dynamically change the field, and the players must constantly adapt to the new situations, and also be careful that they do not end up falling off of the stage. 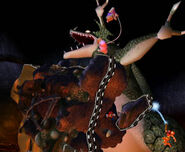 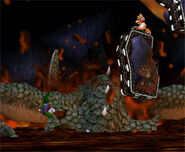 Official screenshot of Kraid sinking back into the lava

The underside of the stage in Ultimate, featuring a stack of Koma blocks

Kraid about to strike the stage in Ultimate