Wikitroid
Register
Don't have an account?
Sign In
Advertisement
in: Pages in the real-life POV, Strategy Guides

Playing with Power! Nintendo NES Classics is the official strategy guide for the NES Classic Edition. It came in two versions: One, the standard release, had a cover mirroring that of both the dustjackets for NES cartridges and the labels for earlier NES games, as well as a montage of various NES packaging for all the games included in the NES Classic. The other, the collector's edition, came with an exclusive embossed slipcase that's deliberately modeled after an old NES cartridge, with the book itself being colored gray with a partial print of an NES controller on the front and back covers. It is published by Prima Games, and written by Garitt Rocha and Nick von Esmarch.

The book, or at least the collector's edition, is 320 pages long. Both books cover a walkthrough of Metroid, as well as a timeline of all NES games placed into specific time periods, including the Middle Period (1987-1989), which included Metroid, that gave a brief blurb about each game, as well as extras including excerpts from various Nintendo Power back issues, commentary and history on the various old games by the guys who made the games in the first place, and a retrospective of each of the 17 games covered in the manual, including Metroid. 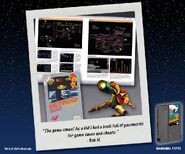 The Middle Period section of the Playing with Power strategy guide. Metroid is included in the center of the right page.