Wikitroid
Register
Don't have an account?
Sign In
Advertisement
in: Pages in the real-life POV, Pages in need of images, Strategy Guides

Playing with Super Power: Nintendo Super NES Classics is the official strategy guide for the SNES Classic Edition dedicated console. It was released on September 29, 2017, on the same day as the Classic Edition itself, with the eGuide released a day earlier. It was published by Prima Games, and written by Garitt Rocha and Nick von Esmarch.

The guide comes in two versions: the standard release, which has a gray cover with thirteen pictures taken from the covers of the games included in the SNES Classic Edition (including Super Metroid), as well as the Nintendo SNES Classic icon. A Collector's Edition was also released, which features an embossed slipcase modeled after the packaging for Super NES games, with the book itself modeled after a Super NES cartridge. The Collector's Edition has an exclusive foreword written by Reggie Fils-Aimé. The pages next to it feature official artwork and screenshots for each game, as well as fanart, and even a photograph of Jenni Källberg cosplaying as Samus Aran. On one page, the graphics of Metroid (on the NES) and Super Metroid are compared. More fanart and cosplay is featured towards the end of the book, as well as a feature on the Metroid Database.

The Super Metroid coverage begins on page 146. It includes a short summary of Metroid and Metroid II: Return of Samus, leading into the story of Super. Each area and boss are touched upon, with maps, screenshots and artwork. After this, there is a section covering details about the game's development and hidden secrets, such as the commercial with Killer the dog, that Super Metroid was intended to be the final Metroid game, the influence Alien had on the series, and the Save or Kill the Animals phenonemon. This is followed by advice from speedrunner Sebastian Haley, and a timeline of the Metroid series up to Metroid: Samus Returns, and the Super Metroid credits.

Notably, the guide acknowledges the Murder Beam and Golden Torizo code, and it refers to Mini-Kraid as "Sclayd", its name in the internal game data. 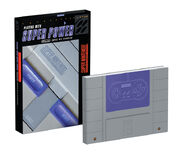 Samus and her arsenal

Tourian, with Mother Brain as a Featured Boss

The legacy of Super Metroid