Eject from vent
Polyp is an enemy found within Norfair in Metroid and Metroid: Zero Mission. In the NES/Famicom version, they are ejected from structures on the ground that resemble Red Blast Shields, while in the GBA remake these launchers have a very unique design. The Polyps they fire are small spherical objects that are tossed either left or right in an arc in the NES version of the game; in the original Famicom version, they are thrown erratically and randomly on both sides. The structures in the ground have a similar function as Air Holes and are not harmful themselves; in Metroid: Zero Mission if Samus Aran steps on one, she will flinch as though she is hurt, although it does not inflict damage.

In Zero Mission, Polyps can be located in several rooms that Samus travels through in Norfair after obtaining the Power Grip. The nature of these entities is uncertain, such as how the seemingly inorganic structures on the ground come into existence; it is possible they are created by Space Pirates. In the same game, these entities can be frozen with the Ice Beam, and can destroyed with a Missile or with the Screw Attack, unlike their appearance in the original NES/Famicom Metroid title, in which they are completely impervious to weapons fire.

"These are poisonous lumps of lava that are blown out of the air holes. They are weak enemies and have no life force."

"Poisonous lava flies out of this vent. Be careful because it will appear suddenly."

The word "Polyp" is also the name of a real-life creature. When amassed in great quantities, real polyps create a coral structure. "Polyp" may also refer to a type of tumor or a hypertrophy of the mucous membrane. 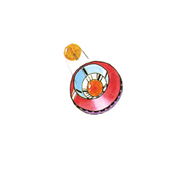 Samus in front of a Polyp in Zero Mission.