Samus Aran's Power Beam (パワービーム, Pawā Bīmu?), also known as the Normal Beam (ノーマルビーム, Nōmaru Bīmu?), is her basic default weapon made of Chozo technology. Readily equipped with her Power Suit, the Power Beam does little damage to powerful enemies, although it can easily clear entire rooms filled with weaker foes. It appears in all Metroid games.

The beam's projectiles consist of individual small spheres with yellow and/or orange colors flying in a straight line. Visually, they have the simplest appearance and trajectory out of all existing beam weapons. When using the Charge Beam, the projectile is noticeably larger and brighter.

The Power Beam is the starting weapon for each mission. It is notable that the weapon was at its weakest in the very beginning of Metroid for the NES/FDS and its remake Metroid: Zero Mission, due to the weapon's projectiles dissipating within a short distance. However, it can be turned into a long-range weapon by collecting the Long Beam; this upgraded Power Beam becomes the standard and initial state of the weapon in every other title in the series (thus insinuating that both beams merged indefinitely). With the exception of Metroid and Metroid II: Return of Samus, it has the capacity to stack with other subsequent beams acquired by Samus, gaining additional properties and power. In Super Metroid, she has the liberty of choosing the combination of beams, but as Samus progressed in her mission, there would be very little benefit, if none at all, for her to revert the Power Beam back to its initial state. In fact, every other title simply made it impossible to regain the basic Power Beam.

The beam remains as the starting weapon. For the majority of the series, however, the Power Beam is incapable of combining with other beams and stays as its own separate weapon. When compared to the other beams, it is a semiautomatic weapon and has the highest rate of fire. in the first two Metroid Prime titles, is necessary to use in conjunction with the Charge Beam and Missiles to fire off Super Missiles, the only vital Charge Combo needed to complete the games. As a result, the Power Beam became more useful. Metroid Prime 3: Corruption remains the only game in the series where the Power Beam can stack with other beam weapons, changing the visual appearance and strength of its projectiles but always keeping its initial high rate of fire.

In Metroid Prime Hunters, the beam can fire a burst of three shots in rapid succession every time the trigger is pulled. If the trigger is held to activate the Charge Beam, the Power Beam will fire a fourth projectile after a slight delay before it begins to focus into a charged shot.

Each Bounty Hunter has their own Power Beam. Though it is weak offensively, it makes up for it with endless ammunition and a high rate of fire. A normal shot does around 6 damage. As with many other weapons, the Power Beam does more damage with a headshot.

Interestingly, in the demo Metroid Prime Hunters: First Hunt, the Power Beam used an ammunition system. It remains the only game where it does so. If the player runs out of ammo, they will no longer be able to fire the Power Beam fully automatically and are unable to use Missiles. This may have been a product of the training hologram where the demo is slated to take place in, however.

Samus is not a playable character in Metroid Prime: Federation Force, but the Federation Force's Mechs use a similar beam called the Power Shot. It functions mostly same as the Power Beam, but takes longer to charge. In Blast Ball, the beam has a limited energy supply that prevents players from shooting too much lest the shots gradually become weaker until none can be fired, at which point the player must wait a short time before starting to fire again. The Adrenaline power-up in Blast Ball enhances the projectile travel speed and energy recovery rate of the Power Shot.

The Power Beam, as depicted in the manga, packs considerably less power than ancient Chozo weapons despite being a recently made one. This is seen when Samus first used it on Mother Brain's Zebetite shields, revealing they were immune to it, but when Grey Voice attacked with a century-old weapon, it was able to penetrate the shields.

"The Power Beam is the basic energy unit produced by Samus Aran's standard Arm Cannon. The Power Beam is expelled from Samus' Arm Cannon. Close observation indicates that this is the Bounty Hunter's most frequently used offensive tool. The Power Beam may be charged, dramatically increasing the weapon's effectiveness. Ineffective against advanced shields and engineered enemies."

"The Power Beam lacks the strength of other armaments that are hidden on Tallon IV but boasts more rapid fire. Acquire the Charge Beam power-up to launch a highly powerful blast of energy." 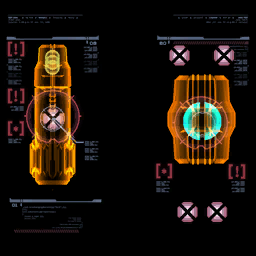 The Power Beam is the default Arm Cannon. It has the best rate of fire.
Press

to select the Power Beam as your active weapon.

The Power Beam can be used to open Blue Doors.
If you see your shots ricochet, cease fire. The Power Beam is not working against that target.
Unlike previous versions, this model of the Power Beam has been augmented with a Charge module. Charged shots are more powerful and deal more damage than normal shots.
Charging also has a limited "tractor beam" that will pull small objects to you.*
You can use the Power Beam to quickly clear an area of weak foes.

"Fire the Power Beam continuously by rapidly tapping the A Button. It becomes much stronger when Samus uses the Charge Beam. Hold the A Button to charge (which also engages a tractor beam effect that draws power-ups toward Samus), then release it. The Power Beam can open blue hatches and has infinite ammo."

"This is the standard beam Samus possesses at the beginning of the game."

"Samus's standard Energy Beam is sufficient for defeating weaker enemies encountered early in the mission. Samus will need to upgrade, however, before facing more dangerous creatures."

"This is Samus' standard beam weapon."

The standard-issue POWER BEAM has limited defensive capability and unlimited ammunition. As with all charge weapons, press and hold the FIRE button to attract energy and ammo, and to charge up the shot. Release to fire a powerful blast. This weapon overheats quickly and works best when fired in controlled spurts.

"The Power Beam may not pack as much punch as other weapons, but it has an unlimited supply of ammo and can be charged up to fire powerful energy blasts. As Samus finds new weapons, the Arm Cannon can adapt to incorporate their functionality."

ATTACK
Press [1] to fire your beam.

"Press 1 to fire a beam. Press and hold 1 and release to fire a powerful Charge Beam."

"Controls: Fire with [1].
Press and hold [1] until fully charged and release to shoot a Charge Beam."

Metroid.com for Metroid: Other M[]

The Armory (p. 10)
"Samus' bread and butter, the Power Beam may be the peashooter of the Metroid universe, but it gets the job done."

* The sentences about the Charge Beam and tractor beam are included in Corruption.

The Power Beam being fired at E.M.M.I.-02SM, as seen in the Dread Announcement Trailer.

The same scene in the Find Your Power commercial; note the increase in visual effects.[1] 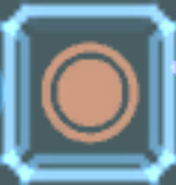 Side view of the modal from Echoes 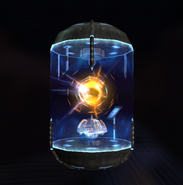 The Power Beam in item form in Metroid Prime 3: Corruption