The Power Suit worn by Samus Aran as it appears in Metroid Dread is uniquely designed compared to past suits. It represents her original Chozo Varia Suit regenerating its appearance, following her surgery in Metroid Fusion that resulted in parts of the suit being removed.[1][2]

In color scheme, the suit resembles the Fusion Suit. It is blue and white in color and has shoulders similar to the PED Suit. Samus later reacquires an orange/gold and then a purple/pink color upon recovering the Varia Suit and Gravity Suit respectively. This would be a carryover from her final suit upgrade from the end of Fusion. Upon first arriving at ZDR, she sported the Varia suit upgrade, but a fight with Raven Beak forced her to wear the blue suit. The helmet and Visor are elongated and sharp, akin to that of the redesigned Varia Suit in Metroid: Samus Returns. The talon-like extensions of the previous helmet are gone, but retain the visor's three points.

The armor has what seems to be organic strands on the suit, both over the armor and where the second layer for the armor would be. These strands are biological remnants of the Fusion Suit, which has slowly converted into the metallic plates reminiscent of her normal Power Suit. As such, the Fusion Suit's slimmed frame has carried over to the new suit, with the chest armor designed like the Varia Suit's. The jet boosters from the main Suit have replaced the globes on the back, with the design of the globes present at the nape above the boosters, the spines on the forearm are now absent, and a row of plates line the spine section not covered by the boosters. The feet of the armor is also much wider and bulkier, with smoother covering at the top.

The Varia Suit upgrade slightly increases the size of her shoulder pauldrons, changes the organic strands from blue to gold, and adds increased armor plating around her collar bone and left forearm. The Gravity Suit upgrade adds thick plating extending from the boots covering outer thighs and hips, changes the organic strands to purple or replaces them with armor plating, and further increases the size of the pauldrons, alongside ribbed ridges at the top.

The Arm Cannon appears as a mix of the Fusion Suit's design, and the original's. Several parts of the Arm Cannon glow a certain color, depending on Samus's current Beam: yellow for the Power Beam, green for the Plasma Beam, and purple for the Wave Beam. Whenever Samus readies or uses the Grapple Beam, these parts glow cyan.

Samus is much faster and more agile than in previous Metroid titles, possessing innate abilities such as the Slide and Power Grip which she either did not possess or needed to earn in previous titles. At the start of Dread, Samus is in possession of at least the Varia Suit, Charge Beam, Plasma Beam, and Super Missile, but most of the Suit's other innate abilities are stripped shortly after Samus encounters Raven Beak, and thus its full original capabilities are unknown.

This suit also has the ability to absorb the abilities of other creatures (both biological and mechanical) simply by touching them. This is later revealed to be a result of Samus's Metroid DNA. This ability strengthens throughout her time on ZDR to the degree that Samus is later able to absorb virtually any form of energy or abilities merely from being within close proximity. Which, according to Raven Beak, results in this iteration of the Suit becoming more powerful than the previous version, and possibly any version before it.

Power Suit
"The Power Suit that Samus wears is based on Chozo technology and was created specifically for her.

Incorporating ability upgrades can expand the functionality of the Power Suit's performance and the Arm Cannon's functions.

"In addition to the Power Suit’s built-in defenses, Samus can increase its Energy—and thus its capacity to withstand damage—by acquiring two kinds of Energy Tank items. Standard Energy Tanks increase her suit’s Energy by 100 each. She can also collect four Energy Parts to reconstruct the same functionality as a standard Energy Tank.

~Transmission from the Dev Team~
"Samus' Power Suit is a one-of-a-kind article, made with the superior technology of the Chozo.

While the series has seen several suit designs, the Fully Powered Suit from the Metroid: Zero Mission game for the Game Boy Advance™ system—obtained by overcoming the Chozodia Ruins trial—is the basis for these new designs.

The events of the previous game—Metroid Fusion, also for the Game Boy Advance system—changed a lot of things for Samus and her suit, but this time, we’re using a new Power Suit to imagine what would be beyond Metroid Fusion."

"Samus' Power Suit is a one-of-a-kind article, made with the superior technology of the Chozo.

By incorporating ability upgrades, the suit's performance and the Arm Cannon's functions can be expanded. #MetroidDread

"The Power Suit Samus wears was made specifically for her. It can also be upgraded to let her safely explore otherwise hazardous environments. #MetroidDread"[4]

"Previously, an emergency removal of X parasite-infected parts resulted in her Power Suit taking on an organic appearance. Now, her standard suit is gradually returning to its original, mechanical form." 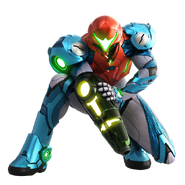 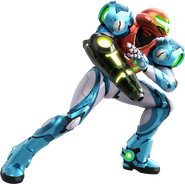 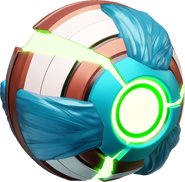 The Varia Suit version of the suit.

Back of the suit.

The Gravity Suit version of the suit. 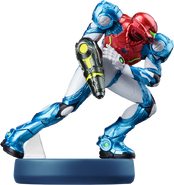