Hovering back and forth in a given area; shoot repeatedly at targets

Psycho Bits are mechanical enemies in Metroid Prime Hunters. They were created by the Alimbics and now fire at any non-Alimbic beings. They hover continuously, and can apparently teleport over long distances, although the robots never use this ability to retreat from battle or move from one point to another within the same area. The Alimbics developed several different models of Psycho Bits, each with increasingly potent weaponry. Samus Aran encounters them throughout her mission.

A small, perpetually flying robot, the Psycho Bit is equipped with one large, round eye that houses its weapon. The top and bottom of its rounded body taper to two sharp points, and its two curved, side-mounted flaps expand and contract when charging and firing its weapon. There are several different models of Psycho Bit, each with varying durability and weaponry.

The Psycho Bit v1.0 is the weakest model, and is typically silver with a bright orange eye. The silver v1.0 units shoot blasts similar to those of the Power Beam, and can be easily destroyed by any weapon. There is another, more advanced model of v1.0 that has a tougher, green-and-black-patterned body, and fires blasts similar to the Battlehammer. These green variants are slightly more durable, but vulnerable to weapons with electrical properties, such as the Volt Driver.

Both versions of Psycho Bit v1.0 can appear together in certain rooms, where they are generated by EnemySpawners. It should be noted that each EnemySpawner will only produce Psycho Bits of a single color; silver and green variants cannot appear from the same generator.

The yellow-colored Psycho Bit v2.0 neutralizes threats with a slow-firing, high-voltage weapon sharing the same capabilities as Kanden's fully-charged Volt Driver. Its electric, orb-shaped projectiles are capable of distorting the vision of enemies equipped with powered armor systems. It is the third-most-durable Psycho Bit version, but possesses the same weakness to rapid-fire weaponry like the Battlehammer and similar weapons as Kanden and all other users of high-voltage weaponry. v2.0 units are only ever encountered in the outer levels of the Celestial Archives.

The Psycho Bit v3.0 is distinguished by its orange-and-black body, which features a pattern reminiscent of lava. The 3.0 model uses slow-firing, magma-based projectiles similar to a charged, non-affinity Magmaul shot. It is the second-most-durable type of Psycho Bit, but possesses the same weakness to the Judicator and other icy weaponry as Spire and other users of high-temperature weaponry. v3.0 units are only ever encountered deep within the volcanic ruins of Alinos.

The most advanced model, the Psycho Bit v4.0 has a purple, blue-lined body. It uses cryogenic nanite technology to fire up to three uncharged shots of supercooled plasma in quick succession, which are capable of freezing its targets. It is the most durable Psycho Bit version, but possesses the same weakness to the Magmaul and similar weapons as Noxus and other users of low-temperature weaponry. These units are encountered in small numbers on both Arcterra and the Vesper Defense Outpost.

A levitating spherical sentry droid equipped with 360-degree sensors and a low-level teleportation device. This model uses a HIGH-VOLTAGE electromagnetic pulse to drain energy from its target.

Similar in design to earlier models, this version fires SUPERHEATED MAGMA at its target. 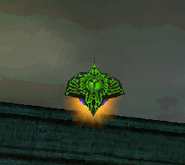 Green Psycho Bit v1.0 on the left, with a standard grey one on the right. 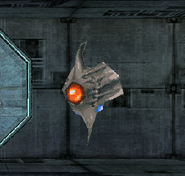 A Psycho Bit v1.0 from the side 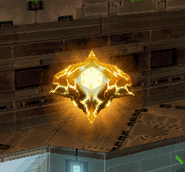 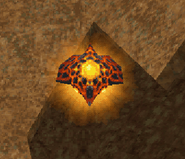