Puddle Spores are creatures that float in lava with their shells tightly closed most of the time. When a predator approaches one, it will open its shell in an attempt to make itself appear larger than it really is. If the predator continues to approach, then the Puddle Spore will slam shut and eject a spread of harmful energy globules. Its shell is impenetrable and emits a foul smell.[2]

Samus Aran encounters them in Magmoor Caverns on Tallon IV in two rooms, Geothermal Core and South Core Tunnel. When she approaches them, they open their shells. Samus can then fire at them with a beam to cause them to flip over, allowing her to step on their under-bellies. They pose no threat other than the energy globules they emit when they close their shell.

"The Puddle Spore floats in lava with its shell tightly closed most of the time. When approached by a predator, the spore opens its shell in an attempt to appear larger than it actually is. If the threat persists, the Puddle Spore slams shut and ejects a spread of harmful energy globules".

"The Puddle Spore is a lava-inhabiting mollusk protected by an impenetrable shell. The creature emits a foul-smelling gas from within its shell, which is unmistakable". 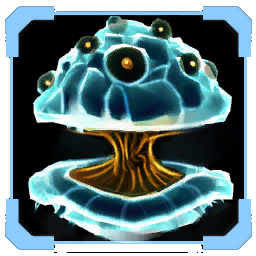 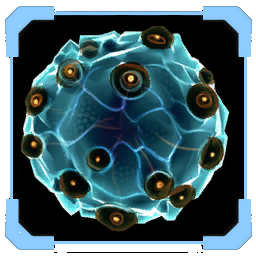 A Puddle Spore opens when approached, attempting to intimidate with its size. When opened, direct fire to its mantle causes it to flip into a defensive position. If it can slam shut, it ejects a spread of harmful energy globules. 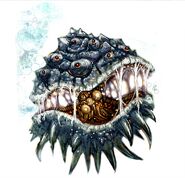 Official artwork of a Puddle Spore.

A Puddle Spore in its flipped position, ready to be used as a platform. 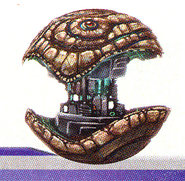