Purple liquid[1], also known as hazardous liquid[2], dangerous liquid[3], and deadly liquid[4][5], is a corrosive substance in Metroid II: Return of Samus and Metroid: Samus Returns. It blocks off areas on planet SR388 and must be drained by defeating all Metroids in the current area in order to continue exploring. The titular creatures do not live in rooms where the liquid is present.

In Return of Samus, the liquid decreases during an earthquake, the latter which is triggered when Samus Aran kills all of the Metroids in a specific area as part of her mission. The game offers no explanation on how and why their deaths trigger or coincide with SR388's earthquakes.

The liquid is slightly opaque compared to water, the other liquid seen in the game.

In the remake of Metroid II, Samus must kill all of the Metroids in a given area and collect their DNA in order to upload it into a Chozo Seal that drains the liquid from the corresponding location. The substance is corrosive to the point of leaving a dark purple taint on the surfaces of tunnels the liquid used to occupy. It is very harmful to Samus even in her Gravity Suit, yet it seemingly poses no threat to all native life on SR388 with the exception of Metroids. Indeed, Gawrons are seen emerging from Air Holes inside the liquid, Halzyns can land inside the liquid and emerge unharmed, and many animals such as Motos and Hornoads are seen roaming the very caverns where the hazardous liquid was once present mere moments ago. However, enemies do not appear inside the depths of the liquid, so the latter's presence can alternatively be explained by the creatures simply exploring their newly accessible environment every time Samus removes the purple substance, similar to how they suddenly repopulate rooms after she kills the resident Metroids.

The purple liquid has a unique characteristic of not triggering a Reserve Tank if one was unlocked with the Zero Suit Samus Super Smash Bros. amiibo. Even if Samus has the Reserve Tank active and charged, it will not work if her energy is fully depleted by the liquid.

Metroid: Samus Returns Official Guide and image 9/11 of the Chozo Memories reveal that the liquid was used by the Chozo against their out-of-control creations, the Metroids. The purple substance is seemingly harmful to Metroids as they tend to be found in far proximity from it, successfully keeping them at bay deep underground within the main areas. Its harmful effect on non-native lifeforms is also of intentional design, as it is meant to discourage and/or prevent off-world visitors from exploring the planet. Thus, the substance not only protects visitors from certain death against Metroids, but it also keeps the species from falling into malevolent hands. 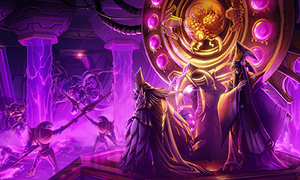 Unfortunately, the implementation of the substance was ultimately flawed. Despite the Chozo flooding their own cities and massive portions of the planet with the liquid, an untold number of Metroid larvae managed to reach or remain on the Surface of SR388 regardless, thus allowing the species' eventual discovery by the Galactic Federation. This led to the events of Samus Aran's Zero Mission and the entire history of the creatures spreading across the cosmos.

Prior to the release of Samus Returns, it was commonly believed and occasionally implied that this substance was either lava or acid. However, this was impossible to tell due to Return of Samus lacking the necessary color palette, as it plays on the Game Boy and as such, is completely in black and white or shades of green along with the Game Boy Player coloring it blue. The instruction manuals for Metroid II (both English and Japanese) only referred to it as a "dangerous liquid", but depicted it as red, like lava. The Super Game Boy Player's Guide further complicates the matter by initially describing the deadly liquid as poisonous acid, but then later refers to "glowing lava" while showing a screenshot of the liquid (with a reddish color for the specific color scheme 1972-1579-8071) in Phase 8.

Metroid Fusion seemed to support the idea that the substance was lava, given the fact that there was a room in the SR388 replication sector of the B.S.L filled with it. However, it was revealed in Samus Returns that both lava and purple liquid existed on the planet and were not the same.

Octrolls thrive in this substance. A Japanese commercial depicts an Octroll emerging from an inexplicibly blue and black liquid. They are not present in Samus Returns.

Beta Acid found in Metroid: Zero Mission and Metroid Fusion is also referred to as "dangerous liquid" in the latter's strategy guide by Prima Games.

The Planet SR388 (p. 12)
"The tunnels between each area are filled with a dangerous liquid that will deplete Samus of her energy. When an earthquake occurs, the liquid may drain away or fill in areas of the tunnels. Whatch [sic] out for the liquid! You must learn to work around it."

Phase 2: After the Quake (p. 56)
"Once you defeat the first Metroid, an earthquake will shake up your surroundings and cause the deadly liquid in this area to seep down deeper into the planet's open chambers."

NO SWIMMING:
"Don't slip into the liquid! If you do, you'll sink quickly and lose Energy at a lightning fast rate. This stuff disappears after the second quake."

Progressing (p. 9)
Avoiding the Liquid
"Some parts of SR388's underground labyrinth are inaccessible because of the dangerous, energy-sapping liquid that floods them. When an earthquake occurs, that liquid shifts, emptying some areas and filling others. You must learn to work around it."

"Q: I'm taking damage when I jump into water...
A: It may look like water at a glance, but it is actually a hazardous liquid that will cause damage, so you'll need to watch where you jump."

Inhabitants & Eco Systems of SR388 (p. 24)
PURPLE LIQUID
"This liquid doesn't deal quite as much damage as lava, but it causes a lot of problems if you stay in it too long. It serves as a gate between areas, its purpose to keep the Metroids from reproducing, escaping, or being taken by those who are up to no good — like Proteus Ridley, Mother Brain, and the rest of the Space Pirates."

Retrieved from "https://metroid.fandom.com/wiki/Purple_liquid?oldid=280495"
Community content is available under CC-BY-SA unless otherwise noted.