Main body: venting system on underside; Command module: opposite-polarity system
The Quads are a type of combat droid invented by O-Lir and used by the Luminoth to guard the Sanctuary Fortress. Quads are made up of two parts: the flying Command Module and the four-legged Main Body. In Metroid Prime 2: Echoes, both parts of the robot ate scannable as different parts. Quadraxis, the Guardian of the Ing Hive, is based on the design of these mechanisms. Dark Quads also exist, Quads that were possessed by the Ing Horde. The Quad robots, along with many other robots, went rogue after the Ing took control and will harm any non-robotic being that comes near, including Samus and the Luminoth.

A Quad robot comes in two halves, the Command Module and the Main Body. When encountered, these two are connected, and can attack together. Either one can be destroyed individually, and the other will continue to fight.

Whether attached or alone, the main body attacks in two ways. First, it can simply swing its legs at an enemy that is within range. Its main mode of attack, though, is to unleash a rapid vortex spin and attempt to charge its target. After using this attack, it will need to vent the excess heat this generates, standing still for several seconds and opening up a small panel on its underside. This panel can be damaged by a Bomb, or by a Boost attack. The spinning attack can also be interrupted without taking any damage by boosting into it before it attacks.

When mounted on the Main Body, the Command Module can fire a powerful beam at its targets. After using this beam, the Main Body will fall stationary and need to vent the heat generated, similar to its spin attack. It can be easily destroyed while still attached to the main body. However, if the main body is destroyed first, the Command Module will detach and float into the air. In this state, it can form polarized shields around itself, with either light energy or dark. These shields are quite durable, but vulnerable to beams of the opposite polarity. It will occasionally shift the polarity of its shields. It will also fire energy pulses at its target; without the channeling of the Main Body, it can't use the sustained beam.

If undamaged bodies are still present when the Command Module detaches, it will avoid direct engagements in favor of moving as quickly as possible to an unoccupied body and attaching to it.

A Quad is formed of two components: the quadruped Main Body and the flying Command Module. The units can function independently, or linked together, as the need arises. The Main Body uses melee attacks in battle. Though durable, it needs to vent excess heat from its body. When this happens, it exposes a venting system vulnerable to concussive blasts.

A Quad is formed of two components: the quadruped Main Body and the flying Command Module. The units can function independently, or linked together, as the need arises. 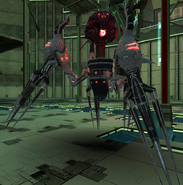 A hybrid light and Dark Quad.

A Quad Hybrid with the lower mechanoid under Ing Possession.
Español Русский
Community content is available under CC-BY-SA unless otherwise noted.
Advertisement