Quarantine Access A is a small hallway in the Phazon Mines. It appears in Metroid Prime.

The room is guarded by four Mega Turrets in the center, which are disabled by a terminal near each of the doorways, giving the room an appearance of a security checkpoint. However, the terminal near the Central Dynamo entrance appears damaged (possibly by accidental turret fire). There is a small tunnel underneath the hallway which is accessible with Samus's Morph Ball. This allows Samus to roll past the turrets and reach the other side. On the side closest to the Metroid Quarantine A, there is a functional Interface Module near the door which can be scanned to disable the turrets. Numerous Xenome Containment Units holding remains of what may be Elite Pirates can also be found in here, as well as metal crates. The remains in stasis emit a heat signature when using the Thermal Visor, suggesting the creature's death was not too long ago before Samus's arrival in this room. 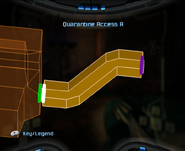 Room shown on the Map. 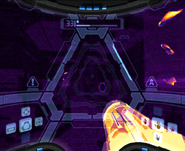 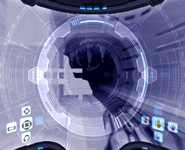