The RB176 Ferrocrusher[1][2] is a manually-piloted heavy industrial machine, presumably used by the Galactic Federation for construction and cargo loading. One such machine was in use in the Cryosphere Materials Storehouse on the BOTTLE SHIP.

After Samus discovers a survivor in the Cryosphere Materials Storehouse, an individual wearing a Galactic Federation Power Suit (later called the Deleter by Samus) pilots the Ferrocrusher to attack them.

The Ferrocrusher is a machine designed primarily for industrial purposes, but can be used as a devastating vehicle in combat situations. It initially attacks with high-speed charges and precision-cutter lasers that cause the ground to explode. The Ferrocrusher can also grab Samus with its loading arms, slamming her into a wall and spinning her for heavy damage.

After the Ferrocrusher is seemingly subdued, the vehicle goes on an uncontrollable rampage, crashing into walls and crates and forcing Samus to retreat. Once it stops, the individual seen in the cockpit is missing.

The RB176 Ferrocrusher is later absent during the post-credits sequence on the BOTTLE SHIP. It is possible that the Ferrocrusher was extracted for repairs, or outright disposal.

"As you might guess from the coloring, this is an industrial machine... but it ends up attacking Samus anyway. It's covered in tools that may have served less violent purposes originally but are very effective as weapons. The trick to defeating it is to stay calm and freeze its moving parts and then dismantle it with extreme force."

The Deleter driving the Ferrocrusher. 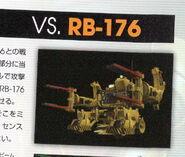