Before crash: Access to Save Station and the Reactor Core, tractor beam tutorial

After crash: Access to Save Station and Cargo Freight Lift to Deck Gamma

Reactor Core Entrance (or Reactor Access in the Tallon Overworld) is a room in Metroid Prime on the Frigate Orpheon. It contains two Auto Defense Turrets that are easily dispatched with Missiles or charged shots, and a panel can be scanned to activate a Morph Ball hologram on the floor, which is used as in the previous room to open the next door. To the left, another door leads to a Save Station. The corpses of Space Pirates can be found lying around the room.

After the crash, the room becomes flooded. The door leading to the Freight Lift becomes de-energized and two Power Conduits must be shot with the Wave Beam to reactivate it.

Space Pirate corpse
"Morphology: Space Pirate
Status >> Dead. This creature looks like it struggled to get through this door."

Ball Clamp
"This device does not seem to be functional. There must be something nearby that will turn it on."

Ball Clamp (2)
"It looks like a spherical shape would fit into this clamp."

Door
"Entrance to Save Station"

Powerless door
"This door has no power.
Two nearby Power Conduits must be energized for it to open. Blasts of electrical energy will energize the conduits. The conduits radiate some heat that is invisible in the normal spectrum."

"The Charge Beam can be used to draw in pickups.
Press and hold

to draw in pickups."

One of the Auto Defense Turrets in the room. 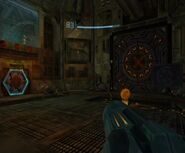 The room, showing the Save Station door and the Morph Ball hologram.